You are here: Home / Archives for Henry County

Missouri’s governor announced Tuesday night in Jefferson City that there are five new positive cases of the coronavirus, bringing the total number of confirmed cases in the state to 15. 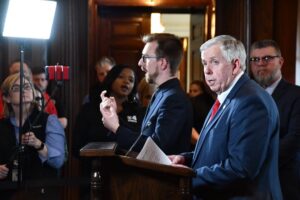 Missouri Governor Mike Parson addresses Capitol reporters in Jefferson City, after he declared a state of emergency in Missouri for coronavirus (March 13, 2020 file photo courtesy of the Governor’s office)

The governor says the state health lab has tested 267 people for COVID-19. There have been 253 negative patients, while 15 have tested positive.

Governor Parson is starting daily briefings about coronavirus, and the first one is happening tonight at the Statehouse in Jefferson City.

The governor is emphasizing the importance of personal responsibility, and washing your hands.

The governor announced earlier that the state’s 13 riverboat casinos will close at midnight, and will remain closed through March 30. Governor Mike Parson says the aim is to prevent the spread of the coronavirus.

Some of the towns impacted by the casino closings are Boonville, Cape Girardeau, Caruthersville and St. Joseph.