You are here: Home / Archives for Harold Brantley 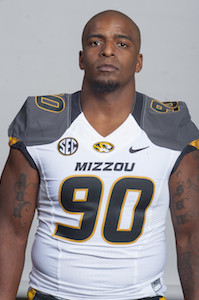 The University of Missouri passed along an update on defensive lineman Harold Brantley, who was involved in a one car wreck on Sunday in Columbia. Brantley is in good condition and recovering following surgery for injuries he sustained.  The prognosis is very good long-term, and he should be able to make a full physical recovery.

·         The injuries sustained in the accident included a fracture in his lower left leg (tibia), which was successfully repaired surgically Sunday night.

·         Brantley also sustained some ligament damage in his left knee which will require surgery at a later date, perhaps within 3-4 weeks…

·         Additionally, Brantley sustained multiple rib fractures and is naturally pretty sore from those.

·         If Brantley continues to progress as scheduled, he will be out of ICU Tuesday and moved into a regular room.

·         It’s too soon to put a timetable on a planned return to football activities.

Maddie Stock, a passenger in the vehicle that Brantley was driving was treated for minor injuries on Sunday and released.

Missouri football defensive lineman Harold Brantley was seriously injured in a car crash Sunday when his car swerved off the highway and overturned just south of Columbia, Mo.  Missouri women’s basketball player Maddie Stock also was in the car. She was treated for minor injuries.

Both were taken from the scene by ambulance. Neither student-athlete was wearing a seatbelt.

Here’s an update from late Sunday night, according to a University of Missouri athletics spokesperson, Brantley’s injuries are not life threatening.

He is still being treated at University Hospital, as of Monday morning.

Brantley played in 14 games last season and had five sacks and seven tackles for loss.

Stock was a reserve on Robin Pingeton’s basketball squad in all 33 games,  She averaged 3.9 points and 1.8 rebounds per game.