You are here: Home / Archives for Google Hangout 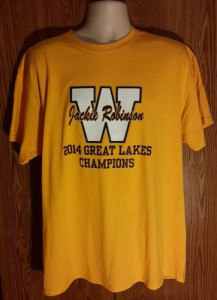 Jackie Robinson West t-shirts are still available to buy on E-bay. Could be a collector’s item some day?

According to the Chicago Sun-Times, city Mayor Rahm Emanuel made a last ditch plea to Little League International to allow Jackie Robinson West to retain their national championship.  His idea for a form a punishment is laughable.  He wanted these players to be allowed to keep their title, yet punish potential teams from the JRW territory in the future, (who may have a legitimate chance to compete in the tournament with legitimate players) suffer by not letting them play.

The Mayor had a ten-minute phone conversation with the CEO of Little League.  Stephen Keener is sticking by his decision.

I find it disgusting that politics has crept into this situation.  Rules are rules.  It was determined that JRW organizers and coaches broke those rules.  I completely agree with the CEO’s decision to strip them of their championship.

Is this sad for the kids?  Sure, but there is no way they are to shoulder the blame.  All they did is play the game, however, some number of those kids shouldn’t have been allowed to play.  Tough life lesson to learn, but I hope it makes them better men when they get older.

Instead of lawyers and community activists and angry parents fighting for the right to keep something they don’t deserve, I just wish someone associated with that program would own up to the mistake, apologize to their players and apologize to the players from Philadelphia, South Dakota, Washington State, Rhode Island, Texas, Nashville and Las Vegas for not giving those teams a fair shot at winning a championship.

We make mistakes. We’re humans.  We also know how to forgive, but when those that cheat than treat themselves as the victim, that’s when I lose my patience.

St. Louis Rams offensive coordinator Brian Schottenheimer interviewed Wednesday for the Vanderbilt head coaching job. What are his chances of landing the job and leaving the Rams in search of yet another play caller?

We talk with Chris Lee of VandySports.com on how the search is going for the Commodores with the exit of James Franklin.

Of course, tonight the Mizzou men’s basketball takes on Vandy. What Chris tells us about a Vandy team that has been decimated by injuries and dismissals could still be trouble for the Tigers who like to live and die by the outside shot.

Nick Jones of BamaHammer.com and Shane Bailey of SECSportsRoundTable.com joins me to look at the upcoming bowl schedule for the SEC. These boys bring some great insight into the BCS title game between Auburn and Florida State, plus the Sugar Bowl, Capital One Bowl, and of course the Cotton Bowl.

Ten, SEC teams are playing in bowl games. We’ll help break down the schedule on this Google Hangout.

Phil Kornblut says there was just a small pocket of South Carolina Gamecock fans who wanted to go to Dallas for the Cotton Bowl. After the bowls were selected, we had heard that USC fans wanted to go somewhere different. I think Mizzou fans would have been happy with a trip down to Orlando, Florida.

As it turned out, the Tigers go back to Texas, USC goes back to Florida and all is right in the SEC universe. Yet, even Steve Spurrier made a plea for the Cotton Bowl.

We’ll talk with Phil of SportsTalkSC.com about that, plus just how serious was all this talk about Saban leaving Alabama.

I believe this may be the first time that Phil and I agree on everything.

The Mizzou defense enters Saturday’s game against the very potent Auburn offense, having allowed a total of 51 points in its last four outings. The Tiger defense is one of just three in the nation that has not given up more than 28 points in any game in 2013. The most points allowed this season by Mizzou has been 28 points, by both Indiana and Vanderbilt. The other defenses who have allowed a maximum of 28 points in 2013?  Michigan State and Stanford.

However, will the defense be up to the task of slowing down Auburn, an offense that has only been held to fewer than 24 points just twice.  Both games came in consecutive weeks in September. On the 14th in a 24-20 win over Mississippi State and then the following week, a 35-21 loss to LSU. Mizzou’s defense ranks 14th in scoring defense, allowing an average of 19.4 points per contest.

TJ Fenske joins me to break down the defense of both teams on this Google Hangout.

One player to watch: Mizzou’s All-American hopeful DE Michael Sam enters the Auburn game leading the SEC and ranking tied for eighth in the nation in QB sacks (10.5 total). He also leads the league in TFLs (1.50 per game/18.0 total), ranking tied for 11th nationally. Sam has been named a finalist for both the Bronko Nagurkski Trophy (most outstanding defensive player) and Rotary Lombardi Award (lineman of the year). He is a semifinalist for the Walter Camp Player of the Year Award and Chuck Bednarik Award (defensive player of the year), and is on the watch list for the Hendricks Award (defensive end of the year).

Sam is 1.5 sacks away from becoming Mizzou’s all-time single-season leader, with former Tiger Aldon Smith’s 11.5 sacks in 2009 currently standing as the top mark…

No Mizzou football this weekend, so I take a look at SEC football around the league with Chris Lee of VandySports.com. A down year for Will Muschamp of Florida. His team has suffered injuries, but the offense continues to sputter. Despite coming off an 11-win season a year ago, some are grumbling it may be time for a change after three seasons.

My early choice for Coach of the Year in the SEC is Auburn’s Gus Malzahn. He’s done such a good job turning around the Tigers, national media is already examining if Auburn can beat Alabama. Just wait a minute! They still have to beat Georgia this weekend.

As we look forward to next weekend’s game at Ole Miss, Chris has them as a Top 25 team and explains why the Rebels are a good football team.

Shane Bailey joins me on this Google Hangout to  preview Mizzou at Kentucky. The Wildcats fan base is energized by first year coach Mark Stoops and while the wins haven’t been there (2-6, 0-5 SEC), Kentucky has played most opponents tough.  Outside the 41-point loss to Alabama they lost to Louisville by 14, Florida by 17, South Carolina by 7 and Mississippi State by 6…hardly blowouts.

Speaking of Alabama, Shane gives us his take on whether or not Nick Saban would take the Texas job. Shane gives an interesting angle.

Check out Shane’s podcasts on SECSportsRoundTable.com

OK Mizzou fans, your Tigers had their hiccup. You know they couldn’t go the entire season undefeated, there would be at least one loss along the way. You just hoped it would be at the end, after a trip to Atlanta and an SEC East Division title was in the bag.

But look, the Tigers will beat Tennessee with a freshman quarterback starting, they’ll win at Kentucky and if they can get past a streaky Ole Miss team on the road, they’ll be left with beating Johnny Manziel and Texas A & M at home on November 30.

Alex Borrell covers the Aggies for KZNE Radio in College Station, TX and I invited him for a Google Hangout to bring us up to speed on Aggies football. We know their offense is putting up killer numbers in the SEC and their defense is awful, but are they playing better?

What would happen if it came down to one game against A & M for a chance to play in the SEC title game?

Adam Stillman of the Jefferson City News Tribune grew up a Mizzou fan and like man Tiger fans, he’s waiting for all of this good fortune to come crashing to an end, while holding guarded optimism. I’m telling him that Mizzou fans need to embrace the excitement around this team.

South Carolina defensive lineman Jadaveon Clowney was held in check at times. He came to the sideline to rest during drives. He dealt with nagging injuries, and he sat out of a game. I’m talking about the 2012 season. Sounds a lot like this year doesn’t it?

I saw a great article from Kevin McCrarey of SportstalkSC.com and those words were used to describe Clowney’s season from a year ago. Kevin says the expectations that have been placed on Clowney are so high, no player could live up to those standards. Kevin calls out the national media, local media, fans, Steve Spurrier and even Clowney himself.

I invited him to join me on a Google Hangout to discuss. Enjoy our visit.