You are here: Home / Archives for Gladstone

The Missouri Senate is expected to debate and vote on the proposed $1.27 billion supplemental budget next Thursday and Friday. That’s according to Senate Majority Leader Caleb Rowden, R-Columbia. 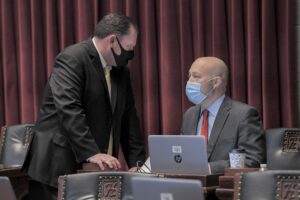 “It (the budget) was more of a what I call ‘keep the trains running on time supplemental budget bill.’ The deployment of federal resources across a variety of state departments is mostly what the bill was about,” Smith says.

If the Senate approves the supplemental budget as is, it would head straight to the governor’s desk. If changes are made by the Senate, the budget would head to a Senate-House conference committee.

Smith is hopeful the Senate will send it to Governor Parson’s desk, saying he doesn’t expect it to be controversial in the upper chamber.

Meantime, the state Department of Health and Senior Services (DHSS) says there have been 25,961 new COVID cases in Missouri in the past seven days, along with 63 new deaths in the past week.

State Rep. Jon Carpenter, D-Gladstone, a senior Democrat in the Missouri House, addressed the issue on the floor this week. He’s warning his colleagues that COVID hospitalizations are skyrocketing in the Midwest.

“We now have twice as many people getting infected with coronavirus in our region (the Midwest) than any other region in this country at any point during the pandemic,” Carpenter says.

During his House floor speech, Carpenter called on the Parson administration to address the pandemic itself and to use some of the $1.2 billion supplemental to address economic hardships, school hardships and food hardships in Missouri.

Click here to listen to Brian Hauswirth’s interview with House Budget Committee Chairman Cody Smith, R-Carthage, which was recorded on November 10, 2020 at the Missouri Capitol in Jefferson City: