You are here: Home / Archives for George Brett

A Kansas Royals spokesman says George Brett apologizes for the tone of his message, but he doesn’t regret getting stern with a person who pestered him for an autograph. The encounter posted on YouTube shows Brett outside KCI Airport cussing at the man,  saying it’d be the last time he signed anything for him and better not see him again. The team spokesman said Brett was tired after getting off that flight and had already signed a number of autographs for that man, who in turn sold them.

Couple of questions.  1…why did Brett sign anything for this guy if he was that upset?  2…if this guy did sell off the previous autographs and made money off Brett’s signature, why is he bad-mouthing Brett in return?  Am I missing something here?

You can watch the YouTube video right here.  Please be advised…graphic language is used!!! 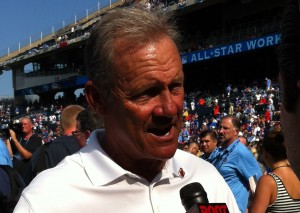 George Brett discusses his passion for the Royals

Royals Hall of Famer George Brett has been a busy ambassador of the Royals and the game of baseball this week. The face of the franchise took a few minutes to talk with me and another reporter on the field about what this All-Star weekend has meant to him.  He has never lost his passion for baseball or Kansas City.  He may have been raised in California, but he is Midwest all the way.  He hopes once everyone across the country sees the ballpark and all the city has to offer, they’ll gain a deeper appreciation for the history and fans of the Royals.

Ted Williams of the Boston Red Sox was the last player to bat over .400 in a season. Tony Gwynn of the San Diego Padres made a run for it in 1994 when he hit .394 and the only other player to make a serious go at the elusive plateau was George Brett in 1980. He hit .390 that year.  Gwynn only appeared in 110 games and had just 475 plate appearances. Brett played in just 117 games and had slightly more at-bats that Gwynn at 515.  That makes Williams’ feat all the more impressive.  Williams played in 146 games and had 606 plate appearances and finished .406 1941.

Brett was at .407 on Aug. 26, but then hit just .265 that final month and some change. In an interview with Ian Eagle of CBS Sports, Brett says there will never be another player that hits .400 or even comes close. Brett cites better pitchers and more specialists used in the bullpens that will make it impossible for hitters to achieve that standard. Check out this segment and the entire interview below from CBS Sports.

Lawyers are seeking a class action lawsuit against Royals Hall of Famer George Brett who endorses Ionic Necklaces, which claims to relieve pain in the neck, shoulders, and upper back.

Seth Thompson of Iowa bought one of the necklaces for $30 at the College World Series after reading the endorsement from Brett and the lawsuit says the product was “useless to him,” after he hoped it would reduce stress and boost energy.