You are here: Home / Archives for Gainesville 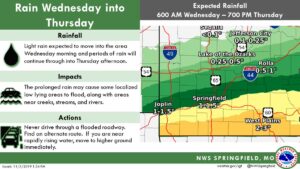 “We’re going to see just a ton of rainfall coming out of Oklahoma moving into the southern part of Missouri during the course of the evening into the overnight hours,” Runnels says. “It’s something that’s kind of unusual for this time of the year.”

Runnels says prolonged rain could cause low-lying areas to flood, and warns about possible flooding after dark.

“People that are traveling along Highway 60 and on south should be anticipating very heavy rainfall starting sometime mid to late evening and lasting into the nighttime hours,” says Runnels.