You are here: Home / Archives for Friends of the United Kingdom Caucus

A bipartisan group of more than 30 Missouri lawmakers has created the nation’s first “Friends of the United Kingdom” Caucus, which highlights the relationship between the Show-Me State and the UK. 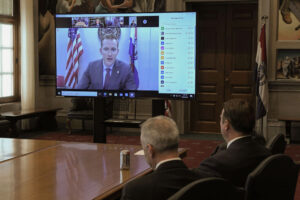 “And we have really kind of a special relationship with them. And particularly this year, being the 75th anniversary of that historic talk that Winston Churchill did in Fulton, Missouri,” Grier says.

He’s referring to Winston Churchill’s famous 1946 “Iron Curtain” speech at Westminster College, which drew about 30,000 people to mid-Missouri’s Fulton. Then-President Harry Truman joined Churchill at that event, and they also participated in a Jefferson City parade.

“We have I think over $330 million worth of exports that go to the UK every year, and we import about the same. Have over 50 UK companies that are based in Missouri that employ over 26,000 people,” says Grier.

Those companies include GSK, Unilever and WPP. More than 25 Missouri companies have a presence in the UK, including Hallmark and Emerson.

The “Friends of the United Kingdom” Caucus held its initial meeting this week in Jefferson City, although several people participated via zoom. A number of Missouri lawmakers watched and participated in the Missouri House Lounge. Grier was in the Capitol’s “zoom room”, which is in the basement.

“The UK Ambassador to the U.S. Karen Pierce was with us on that call to show her support for the efforts that we’re making. We had (British) General Consul Alan Gogbashian who was also on the call, and we had our lieutenant governor,” Grier says.

Grier also emphasizes that the caucus is bipartisan, noting that State Rep. Tracy McCreery (D-Olivette) is the co-chair. McCreery is the Missouri House’s senior member. Grier describes McCreery as a champion for economic development and jobs.

Click here to listen to the full interview between Missourinet’s Brian Hauswirth and State Rep. Derek Grier (R-Chesterfield), who chairs the Friends of the United Kingdom Caucus. The interview was recorded on April 22, 2021: