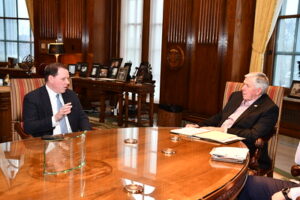 The district includes 36 of Missouri’s 114 counties. The Sixth District includes St. Joseph, Tarkio, Cameron, Chillicothe, Bethany, Trenton, Kirksville, Macon and Hannibal. The Missouri and Mississippi Rivers are both in the district.

The Missouri House Special Committee on Redistricting will meet Thursday at 8:30 a.m. at the Statehouse in Jefferson City. The committee will hear in-person testimony, and written testimony will also be accepted. Committee Chair Dan Shaul (R-Imperial) says the committee is looking for information on what makes the district good and bad, and key characteristics about the district.

Flooding has been a major issue in the district, for the past 30 years. The flood of 1993 devastated the district. The entire town of Pattonsburg had to be relocated. The floods of 1995 and 2019 also caused major problems. Congressman Graves has been critical of the U.S. Army Corps of Engineers, for how they’ve managed the Missouri River.

Agriculture is also a big issue in the district, as is transportation. The district includes I-29, I-35 and Highway 36. Graves is the ranking Republican on the U.S. House Transportation and Infrastructure Committee.

Graves was re-elected to his 11th term in November, beating Democrat Gena Ross with 67 percent of the vote. Graves received 258,709 votes, while Ross received 118,926 votes.