Missouri’s outgoing House Speaker says life issues and the largest tax cut in state history are some of his biggest successes in the Legislature. 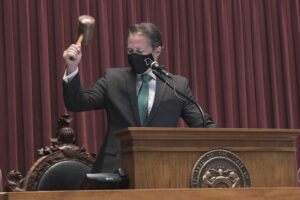 House Speaker Elijah Haahr, R-Springfield, was first elected to the House in 2012. He’s finishing his eighth and final year in the House, due to term limits. He’s also finishing his term as Speaker.

“I was very proud of the work we did on the pro-life bill last year, I thought that was a big thing,” Haahr says. “Prior to me being Speaker, I carried also the largest tax cut in Missouri history and that was a really big one, I think, for our constituencies in the state.”

The 2019 abortion legislation essentially banned abortions once a fetal heartbeat was detected. The House vote was 110-44, and the Senate approved it last year after about 15 hours of filibuster and negotiations behind the scenes.

Haahr is the first and only House Speaker from Springfield in state history, and says that symbolizes Springfield and southwest Missouri’s growing political and economic influence. He says boosting funding for Missouri State University is another success he’s proud of.

“Worked really hard last year on bringing Missouri State University’s funding on parity with other schools, and so we did a $10 million increase to them to get them to a place where they’re funded equally with all the other schools,” says Haahr.

Haahr says this has been talked about for years and even decades, and that to get it done while he was Speaker is very important.

While Haahr has been Speaker, State Rep. Crystal Quade, D-Springfield, has served as House Minority Leader. While the two have disagreed on issues like abortion and Medicaid expansion, they have worked together on issues involving Greene County, such as Missouri State funding and Hailey’s Law, which was sponsored by State Rep. Curtis Trent, R-Springfield.

Haahr has said several times from the House dais that while he and Leader Quade frequently disagree on policy, they both share a love for Springfield.

Not all of Haahr’s priorities have passed in the Legislature, even with GOP supermajorities in both chambers and a Republican in the governor’s mansion.

During an interview in his Capitol office in Jefferson City last week, Haahr reflected on some of his disappointments. He says Hyperloop is one of his biggest disappointments.

“I had made a real strong push to try to bring the Hyperloop to Missouri,” Haahr says. “And they chose West Virginia. We were one of the three finalists that got really close but we didn’t get it. I think in 15 or 20 years that will have a transformative impact on West Virginia’s economy.”

Speaker Haahr says that would have jump-started Missouri as a leader on an issue of transportation importance.

Virgin Hyperloop chose West Virginia for its futuristic tube travel test track and certification center, but has said Missouri is not out of the picture. Haahr is hopeful that will still happen.

Haahr is speaker until the end of the year, and expects the House to be in session in December to take up COVID liability during the ongoing special session.

Click here to listen to Brian Hauswirth’s full interview with outgoing Missouri House Speaker Elijah Haahr, R-Springfield, which was recorded on November 10, 2020 at the Missouri Capitol in Jefferson City: