Calls for the resignation of Missouri U.S. Senator Josh Hawley continue to trickle in, along with some Republican allies and corporate donors pulling their support for him. The political backfire follows his efforts to challenge President-Elect Joe Biden’s election victory and the deadly riot at the U.S. Capitol that followed last week.

“I will never apologize for giving voice to the millions of Missourians and Americans who have concerns about the integrity of our elections,” a statement from Hawley says in a statement. “That’s my job, and I will keep doing it.” 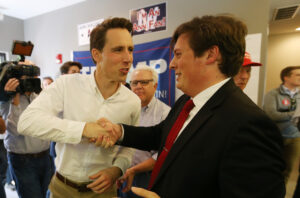 Former Missouri U.S. Senator John Danforth says working to get Hawley elected to the Senate was “the worst mistake I ever made in my life.”

During an Inauguration Day press conference Monday at the Missouri capitol in Jefferson City, Gov. Mike Parson was asked if Hawley, a fellow Republican, should resign. Parson is not touching that question for the time being.

“There’s been a lot of discussion on this. We’ll be talking about Washington, D.C. every day from here after probably on some level,” says Parson. “You know, everybody has to be responsible for the decisions they make, good or bad and different. That’s what I’ll say. Again, today is about the bicentennial and about being sworn in as 57th governor. This is a special day for me and my family. It’s a special day for our state.”

Sen. Roy Blunt, R-Missouri, does not appear to support calls for Hawley’s resignation.

“He has a job to do just like I do and I’m sure he’ll do it. He’s very smart and I’m pleased to get the chance to work with him. We did not agree on this issue the day he announced this challenge, and Ted Cruz’s challenge,” Blunt tells Missourinet. “I think it’s time to move on and remember, half of the Republicans in the House of Representatives had a similar position.”