You are here: Home / Archives for foreign ownership of Missouri farmland

The state operating budget, a proposed supplemental budget and health-related bills will dominate attention in the second half of Missouri’s legislative session, including this week when lawmakers return to Jefferson City from spring break. 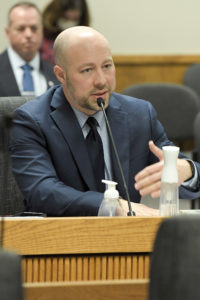 The Missouri House Budget Committee has scheduled Monday and Tuesday hearings at the Statehouse. Governor Mike Parson (R) is recommending a proposed $34.1 billion state operating budget. House Budget Committee Chairman Cody Smith (R-Carthage) says the plan is for the House to give final approval to that budget, next week.

“If things go according to plan, the second week after we’re back (the week of March 29), we could be looking at perfecting and third-reading the budget and sending it over to the Senate. So, that’s our schedule and we’re on schedule so far and our intention is to try to get it done in time enough to send to the Senate and give them adequate time for their consideration,” Smith told Capitol reporters on March 11, as lawmakers were leaving for spring break.

The state Constitution requires Missouri lawmakers to approve a balanced budget, by early May. House Majority Floor Leader Dean Plocher (R-Des Peres) tells Missourinet that it’s important to give the Budget Committee enough time to do their job, so that is a priority.

The Parson administration is also proposing a $1.67 billion supplemental budget. Much of that involves federal dollars.

Speaking of Leader Plocher, his proposed constitutional amendment involving preexisting conditions will go before a House committee in Jefferson City on Monday afternoon.

He describes his proposal as principled and bipartisan. Plocher also notes that many Missourians have preexisting conditions.

“I think Missouri’s economy, Missouri’s families and the quality of life is better when we have affordable health insurance,” Plocher told Missourinet in February.

Agriculture is another issue that will get attention this week in the Missouri House. The Missouri House Agriculture Policy Committee will hold a Tuesday morning hearing on legislation from State Rep. Allen Andrews (R-Grant City), involving foreign ownership of farmland. 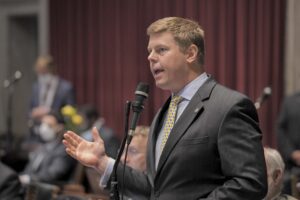 Representative Andrews is the House Majority Whip. His House Bill 1296 would prohibit citizens of a nation in which an American citizen cannot own real property from buying agricultural real property in Missouri.

Across the Rotunda in the Missouri Senate, President Pro Tem Dave Schatz (R-Sullivan) is praising his Senate colleagues for approving Wayfair legislation and his proposed 12 cent-a-gallon gasoline tax increase bills, before the spring break.

Schatz expects some education reform bills to be debated this week on the Senate floor, and is looking forward to a debate soon on prescription drug monitoring program (PDMP) legislation.

“I look forward to having that (Senate floor debate) conversation, obviously this is something that (State) Senator Rehder is very passionate about. When she was in the House, I carried that legislation myself (and) tried to find a resolution for that,” Schatz says.

He’s working with State Sen. Holly Rehder (R-Scott City), who’s filed the PDMP bill for the ninth straight year. A PDMP is an electronic database that collects data on controlled substance prescriptions within a state.

Rehder and other supporters say Missouri’s medical professionals must have knowledge of what their patients are on, prior to prescribing more medication. Bill opponents, including State Sen. Mike Moon (R-Ash Grove) worry about potential data breaches involving your prescription information.

While both the Missouri House and Senate approved PDMP in 2020, they approved different versions of the bill. Missouri is the only state in the nation without a PDMP.

Pro Tem Schatz is vowing to pass PDMP before he leaves office at the end of 2022. He notes it’s come close several times.

“You know, we made some changes. Obviously at the time, we were not able to get it across the finish line. But I think I’m as optimistic as ever that will occur before I leave the Missouri Senate, I think we’re going to see that,” says Schatz.

Rehder has described her current bill as a compromise bill, that had the support of the majority of Senate and House members in 2020.