You are here: Home / Archives for flood control

Missouri’s governor will join the governors of Iowa, Kansas and Nebraska Thursday afternoon in Council Bluffs, to follow-up on Missouri River issues and about the U.S. Army Corps of Engineers. 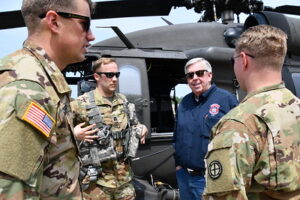 This will be at least the fourth bipartisan meeting between Governor Mike Parson (R) and Nebraska Governor Pete Ricketts (R), Iowa Governor Kim Reynolds (R) and Kansas Governor Laura Kelly (D). While their 3 p.m. meeting will be closed, the governors will brief reporters after the event at the Council Bluffs Police Department.

Governor Parson is still frustrated over the 2019 flooding, which hit northern Missouri especially hard. The Missouri Farm Bureau, the state’s largest general farm organization, says more than 1.4 million acres of farmland in the state went unplanted in 2019, due to flooding.

The flooding also caused the October 2019 collapse of the heavily-traveled railroad bridge over the Grand River in northern Missouri’s Brunswick, causing Norfolk Southern to suspend freight train service between Moberly and Kansas City for a time.

Brunswick is a small farming community, between Carrollton and Moberly. The National Weather Service (NWS) Missouri Basin River forecast center said in 2019 that backwater from flood debris helped cause that bridge to collapse. The logjam collapsed the train tracks.

Governor Parson will also be heading to northwest Missouri’s rural Rock Port on Thursday morning, to tour a major levee known as L-536. He’ll tour the levee and will meet with farmers who were impacted by the 2019 flooding.

U.S. Rep. Sam Graves (R-Tarkio), who’s the ranking Republican on the House Transportation Committee on Capitol Hill, has told Missourinet that flood control and navigation must be the top priority for the Corps, regarding the Missouri River.