You are here: Home / Archives for flags

Missouri’s governor has ordered U.S. and Missouri flags to fly at half-staff at all government buildings in St. Louis on Sunday, to honor the St. Louis Police officer who was shot and killed in the line of duty last weekend. 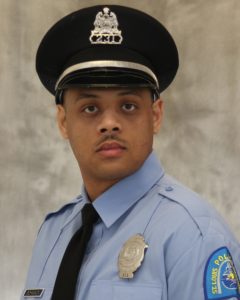 Governor Mike Parson has issued the order, to honor fallen officer Tamarris Bohannon. Governor Parson notes Officer Bohannon was ambushed by a gunman as he responded to a shots fired call in south St. Louis. The officer died on Sunday.

St. Louis Circuit Attorney Kim Gardner has charged the suspect in that case, Thomas Kinworthy, with first degree murder and numerous other felonies.

“At only 29 years of age, Officer Tamarris Bohannon had already established himself as a model public servant and law enforcement officer,” Governor Parson says, in a written statement. “In just four years with the St. Louis Metropolitan Police Department, he was honored twice with the Department’s Award of Excellence and twice as officer of the month. Officer Bohannon’s courage, commitment to excellence in policing and devotion to his young family and the St. Louis community are his lasting legacy. We will never forget all of the good Officer Bohannon accomplished in his brief time with us.”

The governor’s proclamation notes that one of the Department’s Award of Excellence was for taking a bank robbery suspect into custody in December 2018.