You are here: Home / Archives for Feeding Missouri 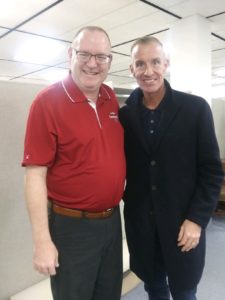 During a recent Jefferson City appearance, McLaughlin visited with Missourinet about his career and about the Cardinals. He emphasizes that Cardinal fans traveling from rural Missouri and other locations are crucial to the team and to downtown St. Louis business.

“It’s something like 60 to 70 percent of the tickets sold on a weekend is from, if you took a radius and did a circle there and drew it out 60 miles, they’re outside that area,” McLaughlin says.

The “St. Louis Business Journal” reports the Cardinals drew 3.48 million fans to Busch Stadium during the 2019 regular season. That ranks second in Major League Baseball, behind the Los Angeles Dodgers.

McLaughlin notes the economic impact of those Cardinal fans staying in downtown St. Louis hotels, and the impact on downtown restaurants and other businesses.

As for McLaughlin, he says he’s living his dream. He notes he grew up seven minutes from Busch Stadium, and his mother still lives at that house. McLaughlin graduated from Lindenwood College (now Lindenwood University) in St. Charles, and praises the school. He says it gave him his life.

He also says Cardinal baseball gives fans a release on the reality of life.

“And what they want to do is go home, flip on a tv, flip on the radio and hear a couple of people that are excited to do the game, excited about Cardinals baseball,” says McLaughlin.

He emphasizes the importance of having fun, during the broadcasts.

Despite frigid temperatures and snow that night, a few hundred Cardinal fans turned out for the event.

McLaughlin tells Missourinet he’s beyond grateful for the opportunity he’s been given. He has two jobs: he works for Fox Sports Midwest and for the Cardinals.

He emphasizes that the Cardinal employees he works with care, and that they love what they do.

The St. Louis Cardinals open the 2020 season on March 26 at Cincinnati, when they play the Reds.

Click here to listen to the full interview between Missourinet’s Brian Hauswirth and veteran St. Louis Cardinal broadcaster Dan McLaughlin, which was recorded on January 17, 2020 at Missouri Farm Bureau headquarters in Jefferson City: