You are here: Home / Archives for federal healthcare reform

Missouri’s junior senator says he’s still waiting for answers, even after getting a reply to his inquiry about the workload at centers processing federal healthcare plan applications. Whistleblowers say there are too many employees and not enough work at centers managed by Serco in Wentzville and elsewhere in the country that are supposed to process paper applications to the federal health care system.

Senator Roy Blunt (R) and other lawmakers including Congressman Blaine Luetkemeyer (R) sent letters to the Centers for Medicare and Medicaid Services asking about the claims. Blunt says after a long delay he finally got a letter in response, that he says was “vague,” and he wants something better.

“I got a non-answer answer,” says Blunt of the letter he received from Marilyn Tavenner, Administrator with the Centers for Medicare and Medicaid Services.

“Did you really tell them to refresh their computer every ten minutes so it would look like they’re doing something,” Blunt asks of the working conditions at the Serco facilities. “Did you really bring library books and board games to work so that the people that taxpayers were paying would have something to do? Those are pretty simple ‘yes or no’ questions and I’d like some ‘yeses’ or ‘nos’ to those questions.”

The 1.25-billion dollar federal contract includes more than 3,000 employees. A reported 600 of those are at Wentzville.

The Republican Speaker of the Missouri House says recent problems with the Veterans Health Administration support the stance his caucus has taken against Medicaid expansion. Tim Jones (R-Eureka) has been opposed to using federal dollars to expand eligibility for that program in Missouri since Governor Jay Nixon (D) raised the issue in late 2012. 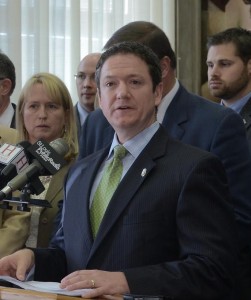 He says issues that have come to light  – veterans needing care being on secret waiting lists, some veterans dying while waiting for care, and records being falsified to reflect shorter wait times than actually experienced – illustrate the problems of having government-run a healthcare system.

“We actually look extremely smart and wise in not expanding Medicaid up to this point,” says Jones.

“The VA healthcare system, the federal Obamacare law and state Medicaid systems – the commonality is they’re all run by a form of the government,” says Jones. “The Medicaid system has now got the heavy hand of the federal government trying to use the carrot-and-stick approach of using the federal bill to expand the state systems.”

“We cannot put our heads in the sand and ignore potential similarities and analogies that can be drawn between the federal government running one massive national healthcare system on one hand versus another,” he adds.

Jones says Medicaid must be reformed rather than just have millions more in tax dollars be applied to the current system.

Medicaid expansion is an issue many Democrats running this year for state legislative seats will focus on.

AUDIO:  Jones says running on Medicaid expansion in this year’s campaigns would be a mistake