You are here: Home / Archives for federal CARES Act funding

Missouri’s health director and the education commissioner will both testify Tuesday in Jefferson City before a bipartisan Missouri House Committee that’s related to the coronavirus. 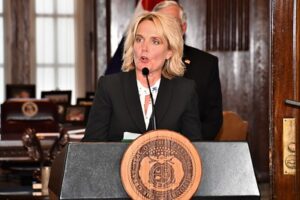 The Missouri House Special Committee on Disease Control and Prevention will meet Tuesday morning at 10:30 at the Statehouse in Jefferson City. The committee is chaired by State Rep. Jonathan Patterson, R-Lee’s Summit, a private practice general surgeon. The committee’s ranking Democrat is State Rep. Kip Kendrick, D-Columbia. Kendrick is the top Democrat on the House Budget Committee.

The committee will be examining the decision by school districts in reopening buildings to students, and will get an update on Missouri’s use of federal CARES Act funding.

The state Department of Health and Senior Services (DHSS) says Missouri now has 57,379 confirmed cases, up from 55,321 on Wednesday.

Chairman Patterson tells Missourinet that DHSS Director Dr. Randall Williams will testify on Tuesday morning, about the trajectory Missouri is on. Dr. Patterson is also interested what will happen if/when a COVID-19 vaccine is developed. Patterson wants to know if DHSS has a plan in place.

Another key part of Tuesday’s hearing will involve Missouri Commissioner of Education Dr. Margie Vandeven, who will testify about schools.

Chairman Patterson notes that he has a nine-year-old and a six-year-old in public school. He says the number one issue he’s hearing about from constituents is about school plans.

Missouri Governor Mike Parson says his office has worked closely with the State Departments of Elementary and Secondary Education (DESE) and DHSS to address questions about reopening.

Contact tracing is also addressed in the report from DESE and DHSS.

Governor Parson says the state is working to help school districts with personal protective equipment (PPE), noting that 1.8 million cloth masks have been made available through the State Emergency Management Agency (SEMA).

The governor says DESE and SEMA are currently working to develop a plan to distribute the masks to Missouri school districts.

Missouri House Speaker Elijah Haahr, R-Springfield, announced the committee’s creation earlier this year. Chairman Patterson notes this will be the committee’s second hearing: they met on March 2 and heard testimony from Dr. Williams.

At that time, Dr. Williams testified there had been no confirmed cases in Missouri. About 100 people had been self-monitoring, according to testimony.

Governor Parson says Missouri is one of the states the White House is concerned about, with increasing COVID-19 cases. The governor told Capitol reporters this week that Vice President Mike Pence called him on Sunday, to offer additional assistance and resources to battle the pandemic.

Missouri will fully reopen for business on Tuesday morning, and will enter phase two of its “Show Me Strong Recovery Plan.” 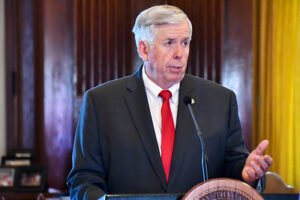 “It is truly incredible to think how far Missouri has come since March,” Parson says. “At that time, no one knew what to expect. There was a lot of uncertainty, worry and concern.”

While there will be no statewide health order during phase two, Parson emphasizes that COVID-19 is not gone.

“Local officials will still have the ability to further measure or regulate in places but from a statewide stance, all restrictions will be lifted,” says Parson.

Missourinet Kansas City television partner KMBC reports Kansas City remains under an emergency order until July 5. All Kansas City businesses cannot have more than half of their capacities, according to KMBC.

“If you feel comfortable wearing a face covering, then wear a face covering. Be proactive, and take precautions to protect yourself, your families and your neighbors,” Parson says.

The governor says the decision to reopen was dependent on the four “Show Me Strong Recovery” pillars, including expanded testing capacity and expanding reserves of personal protective equipment (PPE).

The governor has also signed an executive order that extends Missouri’s state of emergency through December, in order to utilize federal CARES Act funding.

Governor Parson’s next media briefing with Capitol reporters will take place on Tuesday afternoon at 3 at the Statehouse.