You are here: Home / Archives for elk

The Missouri Department of Conservation’s elk restoration program will eventually lead to an elk hunting season in Missouri. The Conservation Department’s elk experts have been given the green light by the Conservation Commission to begin some initial planning for such a hunt, though it is still likely three or more years away. 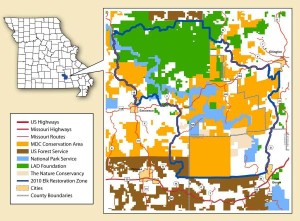 Department Resource Scientist Lonnie Hansen says the Department has presented recommendations to the Commission about what criteria should be met before a hunt is held. A key consideration is population.

“Population needs to be growing, there should be a minimum number of elk out there, an acceptable bull-to-cow ratio, and certainly it has to be a certain time period after we’ve finished the actual restoration itself.”

Hansen says the elk population needs to reach 200 individuals and an annual growth rate of 10 percent before a hunt could be offered. He says the herd is expected to reach about 125 by this fall.

He also says the elk are still adjusting after being moved from Kentucky beginning in 2011.

“They’re still to some extent suffering from some of the stresses of capture, handling, disease testing and those kinds of things. By capturing elk in another state we kind of disrupt the social system, so it takes time for the elk to settle in.”

How long that settling in will take, Hansen says he can’t be sure. He says once that’s done it will be easier to judge how fast the population will grow, but he says an elk season could be possible as early as the fall of 2016. 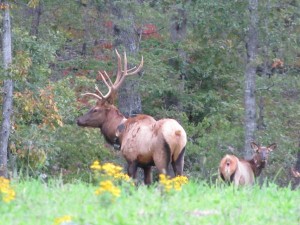 This bull and cow elk were photographed on the Peck Ranch Conservation Area in Carter and Shannon Counties, part of the Elk Restoration Area. (photo credit; Reta Barkley)

Based on the Department’s recommendations, the Commission at its meeting earlier this month, instructed the Department to begin consideration of the guidelines for an elk season.

“We’ll have a committee make some recommendations whether it will be during the rut or after the rut or even specifically where it will occur. Those are just decisions we’re going to have to make down the road.”

“That might also allow us to manage elk that get into places where we don’t want them … will we be hunting elk in northern Missouri and other parts of the state? Certainly not elk that we’ve restored. Elk and row crop agriculture, for example, don’t mix very well. So, we don’t want them in places where we have row-crop agriculture and never expect to see elk like we have whitetail [deer]. We want whitetails everywhere in the state. We don’t want elk everywhere in the state.”

Hansen says an elk hunting season will have some positive impacts on the economy locally in areas where it is conducted, but it won’t have the same statewide impact as the deer seasons.

“Because it will be so limited I think the tourism, the folks that will go down just to see the elk is probably going to have more local impacts.”

For more on the elk restoration program in Missouri, visit the Department’s website.

The Conservation Department is investigating whether the drought is responsible for the deaths of some of the elk the state has imported over the last two years. 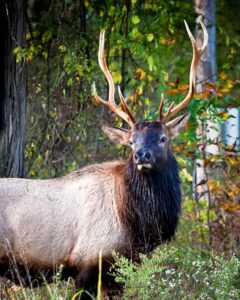 Biologist Lonnie Hansen says several have died recently, and there is no doubt the drought is impacting them but it’s unclear if it’s a factor in those deaths.

“You know we’ve put them into a pretty rough environment with the drought and last year, when they were released, we had good conditions. We had great food plots and this year the food plots are all dried up and while the elk are tough and they can make a living out of what’s in the woods and things, we are seeing a bit of mortality as a result of, we think at least somehow related to the drought that we’re seeing down in southeast Missouri.”

Hansen says it is likely that drought will be no more than a contributing factor in those deaths. “Generally elk are very adaptable and very tough critters and we expect, while there might be some setbacks here and there, they’ll still do well.”

Samples from the dead animals have been sent to the University of Missouri and the University of Georgia. Hansen says of what he expects the results will reveal, “These animals, to get them here went through a lot of stress and so it’s probably more related to a combination of factors and we’re trying to figure those out right now to see if there’s anything we can do to resolve some of the issues.”