You are here: Home / Archives for egg prices

Missouri’s attorney general is teaming up with the Missouri Grocers Association (MGA), to protect you from any potential price-gouging during the COVID-19 outbreak. 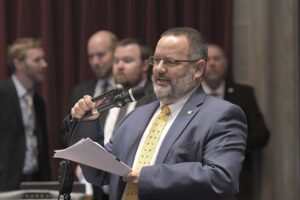 State Rep. Dan Shaul, R-Imperial, heads the 1,300 member MGA. He told the attorney general’s office last week that there will be upward price pressure on some commodities, due to the rapid sale of them.

“We’re (the attorney general’s office and MGA) working together to make sure, one, to protect the consumers of the state, to make sure they’re getting a fair deal on their food,” Shaul says. “But also making sure that the businesses in Missouri aren’t subject to frivolous complaints.”

Shaul notes egg prices are continuing to rise, and he expects some relief on that next week.

He tells Missourinet the aim of the partnership with Schmitt’s office is to provide you with food at a reasonable price, and to protect retailers from “bad actors.”

“Anytime you have a crisis like this, the majority of the grocery industry in Missouri is acting properly, and doing what they can to meet the needs of the citizens of Missouri,” says Shaul.

He says the grocery industry is working tirelessly to serve their communities, during the pandemic. Shaul says Missouri’s grocery workers and retailers have answered the call from Missourians for food.

But he also agrees with Schmitt’s position that “there are a few bad actors that may cast Missouri’s hardworking grocers in a bad light.”

Missouri’s governor says many residents have seen empty grocery store shelves, and emphasizes this is a demand issue and not a supply one. Governor Mike Parson says Missouri’s food supply remains strong, adding that the state’s farmers, ranchers and grocers are working hard to restock shelves quickly.

Click here to listen to the full six-minute interview between Missourinet’s Brian Hauswirth and Missouri Grocers Association President Dan Shaul, which was recorded on March 26, 2020: