You are here: Home / Archives for Dru Buntin

A report from a special commission recommends Missouri work with neighboring states and the Army Corps of Engineers to change how flood recovery and prevention are approached. The commission also wants the federal government to be more receptive to innovative ideas. 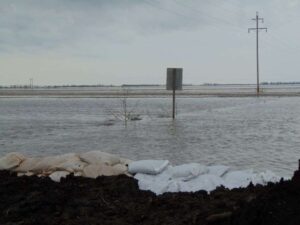 2019 flooding in Craig (Photo courtesy of Brent Martin of KFEQ in St. Joseph)

Gov. Mike Parson created the Flood Recovery Advisory Working Group in an effort to break the cycle of Missouri River flooding which caused widespread, catastrophic damage in 1993, 2011, and 2019. The group also reviewed problem areas along the Mississippi River.

“For crop insurance reasons, for just basic protection reasons, and so there’s a finite window of opportunity to be able to go in and look at doing something different,” Buntin tells Missourinet affiliate KFEQ in St. Joseph.

He says Missouri, Kansas, Nebraska, and Iowa want that changed. They want something different. He says Missouri is working with its neighbors and the Corps of Engineers to take a longer look at the problem areas along the Missouri River which repeatedly flood and recommend changes which could prevent or lessen future flooding.

A proposed Missouri River levee project in extreme northwest Missouri could become a prototype to prevent the recurring flooding along the river – if it can clear federal regulatory hurdles. Atchison County Levee District #1 proposes a setback levee which would add as much as 200 acres of wetlands and, county officials hope, prevent the repeated flooding in that area. Buntin says federal officials have raised concerns, because the approach is so different.

“Trying to wade through many of the funding sources that would help the levee district, help Atchison County accomplish that project don’t envision this type of project,” according to Buntin.

Buntin says that’s the problem. Federal regulations often lock landowners in to repairing the same system which continues to fail during flood years. Buntin says federal requirements which must be met for wetlands easements actually stand in the way of the Atchison County project, even though the project would greatly increase wetlands in the area. Buntin remains optimistic the project will be approved, eventually.

Buntin says the commission is determined that its report does not simply sit on a shelf. He says Missouri already is working with officials in Kansas, Nebraska, and Iowa. He says they want to speak with one voice when expressing concerns to the Army Corps of Engineers and when pushing for change.

“And I’m always reluctant to say we’re going to study this, because that’s really not what the intent of this whole arrangement is. It’s to look at where the most problematic areas (are) and what are some changes that we could make that would reduce damages in the future,” Buntin says.

The report also recommends the federal government pay the entire cost of levee restoration, whether the levees are federal or non-federal levees. It proposes Atchison County be moved out of the Omaha district of the Army Corps of Engineers and into the Kansas City district, with the rest of the northwest Missouri counties bordering the Missouri River.