You are here: Home / Archives for Drive Sober or Get Pulled Over Campaign 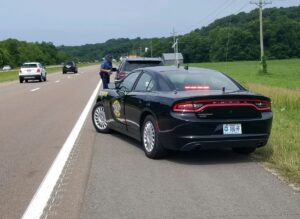 “We’re encouraging people to make sure that they allot themselves a little bit of extra time, be aware of that extra traffic, be courteous when they’re driving,” Hotz says.

State troopers say 11 Missouri motorists were killed and another 421 suffered injuries during the 2018 Christmas holiday counting period, which was 108-hours. Hotz says there were more than 1,100 traffic crashes during the 2018 holiday.

“We know this time of year a lot of people are celebrating a lot of different things,” says Hotz. “A lot of family gatherings, office parties, those types of things.”

Captain Hotz is also urging you to use a designated driver if you drink during the Christmas period. He tells Missourinet that troopers are participating in the “Drive Sober or Get Pulled Over” campaign during the Christmas holiday counting period. The campaign focuses on removing drunk drivers from the road.

“The Patrol is out there looking for those violators to get them off the road before they can be involved in a traffic crash and injure or kill someone,” Hotz says.

Troopers arrested 106 Missouri motorists for driving while impaired, during the 2018 Christmas holiday period.

Hotz also emphasizes that troopers are on the road to assist motorists who run out of gasoline or need other assistance for things like a flat tire. He encourages anyone who needs assistance or who faces a traffic emergency to call *55 on their cell phone. You can also dial 1-800-525-5555.