You are here: Home / Archives for Dr. Ernie Goss

“Farmers are out there and they’re feeling better about the economy, but unfortunately we’re not seeing it in the businesses on what we call ‘Rural Mainstreet,’” Goss says. 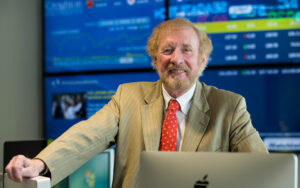 Every month, Goss surveys rural bankers for a Rural Mainstreet Index. His latest survey indicates the economy in Missouri and nine other states in the Great Plains and Mountain West will dip in the current 4th quarter.

But Goss, an economics professor at Creighton University in Omaha, says commodity prices have been climbing “fairly dramatically” this fall, leading to optimism in the ag sector. About a third of U.S. farm income this year will have come, though, from the Trump Administration’s payments to make up for trade losses and Goss says those are likely to end with the Trump presidency.

“On the flip side, we’re likely to see the Biden Administration be a little more positive on trade,” Goss says. “…You’ve got some positives and some negatives. I expect 2021 – at least as we sit here now — to be pretty good for the agricultural sector given the expansion on trade.”

The economic picture is brightening for both Missouri and the Midwest. Creighton University’s August survey of supply managers and business leaders across the nine-state region finds the financial situation slowly improving.

“The index from that survey rose to its highest level in two years. In fact, it was well above growth neutral at 60.0 and that’s up from July’s number of 57.4,” Goss says, “so it was a good reading.”

Goss says the survey found manufacturing is steadily picking up, but still has not fully recovered from the downturn caused by the coronavirus pandemic.

“Even despite the increases that we’ve seen over the last couple of months, we’re still below levels of production and overall economic activity in the regional manufacturing sector,” Goss says. “We’re still not back to pre-COVID levels but we’re moving in the right direction.”

The unemployment rate for the nine-state region hit a high of 9.7% in May and has fallen in the new August survey to 5.8%, but Goss says there’s still trouble with hiring.

A report from the U.S. Bureau Labor Statistics says the region has lost about one-million jobs since the onset of COVID-19, for a 7.3% decline.

By Matt Kelley of Radio Iowa