You are here: Home / Archives for Doug Funderburk

The state House has passed this year’s attempt at a law to nullify federal gun laws in Missouri. The bill would declare null and void any current or future gun law or regulation that infringes on the right to keep and bear arms. 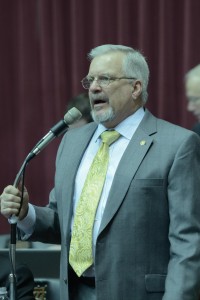 “I don’t want to risk a good law enforcement officer’s career on the potential that they may have made a one-time mistake in the carrying-out of their duties,” says Funderburk.

Representative Judy Morgan (D-Kansas City) says the bill is clearly unconstitutional and will be thrown out by courts. She is also concerned about some of the laws it seeks to nullify.

“It’s against federal laws for any person to sell any firearm or ammunition to felons, fugitives from justice, unlawful drug users, anyone who has been committed to a mental institution or anyone who has been convicted in any court of a misdemeanor crime of domestic violence,” notes Morgan.

The two chambers have only until Friday evening to agree on a law and send it to the Governor.

See how House Representatives voted on the bill that would block federal gun laws in Missouri and allow some school personnel to carry concealed weapons: 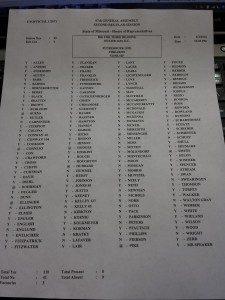 Find out who your state representative is with the search on the House homepage:

The House has given initial approval to a bill meant to nullify federal gun laws within the state. 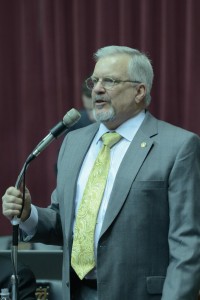 The bill, HB 1439, would deny state law enforcement agencies and courts the power to enforce federal gun laws and would make anyone deemed in violation of a Missourian’s Second Amendment Rights liable to legal action by that Missourian.

Other versions of the legislation would have made law enforcement officers subject to criminal prosecution for enforcement of the gun laws targeted by the measure. Sponsor, Representative Doug Funderburk (R-St. Peters) says he removed that language at the request of law enforcement.

“This is what law enforcement said was their most deep, heartfelt concern about the bill from last year and the bill that I originally filed this year,” said Funderburk.

The bill would also allow specified school personnel to carry concealed weapons with specific training. Representative Rick Brattin (R-Harrisonville) says that will serve as a deterrent to anyone who would consider carrying out a school shooting.

Representative Genise Montecillo (D-St. Louis) isn’t convinced that is the proper role for a teacher.

“I have no issue with having trained, real police officers in our schools. I think that’s a good idea. I encourage that. I’ve seen the effect and the impact that they’ve had in my school district. I do have issue putting folks that have sort of a pseudo police officer training and having folks filling two different roles.”

The proposal would not allow public hearings by school districts before the allowing of armed school personnel on school grounds.

Those House Democrats that oppose the legislation dismiss it as unconstitutional.

“On its face it contradicts our oath of office,” says Representative Stacey Newman (D-St. Louis). “It’s going straight to court if it becomes law.”

The legislation would prevent a medical practitioner from being required to ask a patient about his or her gun ownership status or to disclose such information except in specific circumstances.

The proposal would bar the disarming of a person carrying openly or concealed unless he or she is under arrest and lowers the minimum age at which one can obtain a concealed carry permit from 21 to 19.

It requires another favorable vote to go to the Senate.

The legislature failed to override Governor Jay Nixon’s veto of a controversial gun bill. Now Senate Republican leaders who helped uphold that veto have made good on a promise to offer an alternative. 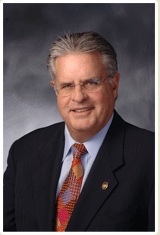 Senate Majority Floor Leader Ron Richard (R-Joplin) has unveiled a draft of a bill that seeks to void in Missouri federal laws that “infringe on the people’s right to keep and bear arms.” The primary differences between it and its predecessor, HB 436, are that it would not make it a crime to enforce certain federal gun laws in Missouri, or to publish the names of gun owners.

Richard says, “The intent of the bill is exactly the same. We’re just trying to make it constitutional so we can get past a court challenge.”

Richard wants the bill to be a bill to reaffirm the Second Amendment to the U.S. Constitution in Missouri, and to give Missouri authority over the federal government when it comes to gun laws. He says he is making good on a promise to release draft language at least a month before pre-filing begins to allow people to provide feedback and suggest changes.

“We’ve tried to make it firmer on the Tenth Amendment, the overriding premise being that the federal government is usurping state’s rights.”

Richard says law enforcement expressed concerns to him that the draft’s predecessor interfered with their ability to perform their job.

“We felt, and public safety officials felt, that local authorities weren’t able (under that bill) to cooperate with federal authorities on the bad guys when it had to do with guns, and we got language (for this new draft) from the Missouri Sheriffs’ Association that helps that.”

The bill would require a local sheriff be notified before a federal warrant can be served in his jurisdiction. That requirement could be waived in cases of national security or when a sheriff is believed to have violated confidentiality in the issuance of warrants.

The bill does not specify what federal laws it would invalidate in Missouri. Rather, it says it would apply to certain taxes, registration and tracking requirements, prohibitions on the possession, ownership, use or transfer of a specific type of firearm and confiscation orders.

It would allow for the creation of school protection officers; teachers or administrators designated by a district that would be authorized to carry a concealed firearm. It lays out how such a designation can be made and how training for such officers should be developed.

The sponsor of HB 436, Representative Doug Funderburk (R-St. Peters) says the idea of barring the publishing of gun owners’ names has not been abandoned.

“The issue of publishing lists or publishing names is one we’re going to have to work on separately and try to figure out what is the right balance … the language that protects the publishing of overall lists but doesn’t limit anyone’s right, not just the media, but anyone’s right to the First Amendment. That’s still a work in progress.”

Funderburk says he thinks this bill keeps the most important provisions and underlying goals of his bill, and he wants to hear feedback.

He tells Missourinet, “I would like to hear back from the very same persons and people who were critical of the first bill.”

Richard says Senator Brian Nieves (R-Washington) will handle the bill and he has promised Nieves it will be the first one out of the gate.

“(Senate President Tom) Dempsey and I gave a commitment … it’ll be the first bill to committee and when I get the bill as Majority Leader it’ll be the first bill we handle in the Senate and we’ll spend time on it and get it to the House as quickly as we can, because if the Governor vetoes it again, we’ll be working toward overriding the veto during session.”

See the full language of the draft legislation here, and see a summary here.

On the same day the U.S. Senate rejected an expansion of background checks for gun purchases, the Missouri House of Representatives has advanced two gun rights bills.

A bill (HB 170) sponsored by Rep. Casey Guernsey (R-Bethany) would make laws passed after Jan. 1, 2013 that ban, restrict ownership or require registration of a gun or magazine unenforceable in Missouri and would make it a Class D felony to attempt to enforce them.

A separate measure (HB 436) sponsored by Rep. Doug Funderburk (R-St. Peters) would make any law that infringes on the right to bear arms under the Second Amendment of the U.S. Constitution invalid according to state law.

Guernsey says of his bill it is one he never thought he’d have to sponsor.

“We as a legislative body in Missouri are going to have to put ourselves between the citizens of Missouri and the federal government when it comes to one of our most basic, fundamental, constitutional rights, that of our Second Amendment rights to keep and bear arms,” Guernsey said.

“You talk to any lawyer that’s standing here … they’ll tell you that this bill basically benefits the trial lawyers,” Newman said. “It just gives them something else to contest in court because we all know that this bill is not going to hold any muster.”

Rep. Paul Curtman (R-Pacific) countered by saying it is outrageous that state or federal lawmakers would try to infringe on Missourians’ Second Amendment rights.

“If you were to go back in time 230-some years and look at a dictionary, the word ‘infringe’ would say something along the lines of ‘to corrupt’ or ‘to corrode,’ so anything that the federal government does to restrict the right of the people to keep and bear arms is, in fact, an infringement, and therefore unconstitutional,” he said.

An amendment was adopted on Funderburk’s bill that would allow school districts to designate school protection officers. These would be teachers or administrators that would be allowed to carry concealed guns on school grounds. It was sponsored by Rep. Rick Brattin (R-Harrisonville).

“They would have to have a valid concealed carry weapons permit and also go through post-commission training … basically police officer training … this is a way of protecting our schools and our children where it matters most, at our most vulnerable areas of our society,” Brattin said.

Other provisions between the two bills would lower the age to be eligible to apply for a concealed carry weapons permit from 21 to 19 and allow permit holders to open carry, bar the publishing of gun owner lists, prevent medical practitioners from asking gun ownership status of patients and exempt individuals from federal background checks in private gun transactions.

Both packages would advance to the Senate with another favorable vote.