You are here: Home / Archives for Department of Economic Development

Governor Nixon says he’s pleased with the progress of the special legislative session, though the House has gone beyond the call he issued to bring lawmakers back to the Capitol.

Nixon says he appreciates the quick work of the House to approve the two bills he wants completed during this special session, even though the jobs bill has taken on extra baggage. END_OF_DOCUMENT_TOKEN_TO_BE_REPLACED

Incentives for Ford to keep its factory in Kansas City running at full capacity and an overhaul of the state worker pension system cleared the House and have moved to an uncertain reception in the Senate on the first full day of this special legislative session.

The Ford Motor Company could receive tax breaks totaling $100 million at its Claycomo plant under an auto manufacturing bill (HB 2) approved by the House. Sponsor Jerry Nolte, a Republican from Gladstone, has high hopes the Senate will be receptive. END_OF_DOCUMENT_TOKEN_TO_BE_REPLACED

Two bills requested by Governor Nixon have passed in the Missouri House during this special legislative session, but neither is in the form the governor prefers.

In fact, questions have been raised about whether the House has acted within the scope of the special session call. The governor’s chief of staff has issued a letter warning that expansion of a bill that would provide up to $100 million to the Ford Motor Company to keep its Claycomo plant in Kansas City at full capacity makes it vulnerable to a lawsuit. Some Democrats in the House picked up that theme during debate, accusing some members of endangering nearly 4,000 jobs simply to push their pet projects. END_OF_DOCUMENT_TOKEN_TO_BE_REPLACED

Legislative leaders seem open to a special session, but its success is dependent on agreement that couldn’t be reached at the end of the regular session.

Unemployment has eased a bit in Missouri as the state seems to be taking baby steps toward recovery.

A two-tenths of a percent drop in the unemployment rate to 9.3% in May might not be as encouraging as it seems though. Federal government hiring, nearly all temporary Census workers, totaled 7,300 jobs. Without that, a net job increase of 4,900 jobs last month would have been a decrease. END_OF_DOCUMENT_TOKEN_TO_BE_REPLACED

Business executives will be advising the Nixon Administration on how to best plan for Missouri’s economic growth.

The strategic objectives will pinpoint both industries that now exist in Missouri and those that could be drawn to the state to drive economic growth. Kerr says an example of what the groups might focus on is the animal health corridor developing between Columbia and Manhattan, Kansas. More than 30 animal health companies have located in the area between the home of the University of Missouri-Columbia and Kansas State University. Those companies employ more than 30,000 workers carrying out $638 million in research and development annually.

Missouri’s economy thrives on agriculture, tourism, manufacturing and energy. Kerr believes the state can improve on its strengths, expand and pursue other industry. The key, he says, is to not to spin out so many ideas and concepts that everything is planning and nothing is done.

“I think the problem that sometimes states and communities and organizations have is they’re not specific and they’re not targeted in terms of identifying a small number of critical priorities and that’s what we intend to do,” according to Kerr.

The Executive Advisory Board will identify members of a statewide Steering Committee that will work with Regional Planning Teams to ensure involvement by leaders throughout Missouri. The Steering Committee plans to meet in early June. Meetings will take place throughout the year with completion expected by the end of the year.

Some of the suggestions that grow out of this process might be before the legislature next year. 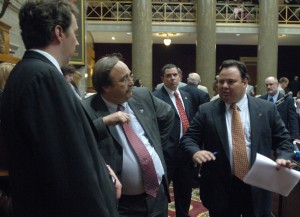 A state representative has written Governor Nixon, requesting a special session to re-consider an incentive package aimed at keeping full production at the Ford plant in Kansas City.

A proposed deal to win approval of the Manufacturing Jobs Act collapsed in the last hour of the legislative session. The act was attached to several pieces of legislation. Nolte held out the most hope for SB 773, which could have been approved by the Senate and sent to the governor. The Senate, though, resisted. Then, the Senate tied passage of that legislation with approval in the House of the pension overall bill. This time, the House resisted. The deal fell through.

“What I’m asking the governor to do is to call a special session so we could re-consider some of the economic, job-creating legislation that we were unable to get passed, more specifically the Manufacturing Jobs Act,” Nolte tells the Missourinet in a telephone interview.

Ford employs 3,700 workers at its Claycomo Plant, making the F-150 pick-up and the Ford Escape. The Escape line will end soon. Other states hope to lure production of its successor away from Missouri. Nolte says Missouri is at a disadvantage in competing with states such as Kentucky and Michigan, which have both made pitches to Ford.

The House approved the Manufacturing Jobs Act as HB 1675 in February. It would allow manufacturers and their suppliers to keep a percentage of their withholding taxes. To qualify, the business would have to make at least a $100,000 capital investment per full-time employee to make a new product. Suppliers could even qualify for a sweeter tax break.

Nolte worries that losing one production line could be the beginning of the end at Claycomo.

“Then I think we run the distinct risk of having it just spiral down until at some point, in the relatively near future, we may well not see production there again,” Nolte says. “While that is speculative, I don’t think it is alarmist or outside the realm of possibility.”

The tax incentive would apply to more than Ford, though Nolte says the urgency in calling a special session is driven by Ford. He says an executive decision likely will be made this year, well before the legislature re-convenes in January. A proposed swap: pension reform for economic development collapses on the final day of the legislative session when the Senate and House fail to reach agreement; failure that places jobs at risk in Kansas City.

House leaders had been pushing the Senate to pick up and pass the Manufacturing Jobs Act, seen as crucial to keeping a production line from leaving the Ford Claycomo plant in Kansas City. END_OF_DOCUMENT_TOKEN_TO_BE_REPLACED

A leader in the Missouri House says Governor Nixon needs to spend less time holding news conferences in Kansas City and more time working with legislators at the Capitol.

Governor Nixon takes a trip to Kansas City to tout an economic development bill seen as vital to keeping a production line running at the Ford Claycomo plant. Nixon has told workers at the Ford Claycomo factory that the Missouri Manufacturing Jobs Act will protect automotive jobs as well as other manufacturing jobs in the state. The act would allow qualified manufacturers and supplies to retain a portion of their withheld income taxes. Incentives would be capped at $15 million annually.

“You know, I’m thrilled that the governor is going to Kansas City to help make this deal happen, I just think he should spend some time here in this Capitol to really make this deal happen,” Tilley tells reporters, “because the reality is that you can say all that you want to Ford, they’re looking for this bill to make this deal happen and his time is better spent on the other side of the building (the Senate), sitting down with people and explaining to them how important this bill is for the citizens of this state.”

Tilley says the bill with the greatest chance to pass this session is SB 773. Tilley says it shouldn’t take must personal lobbying from the governor to get the bill passed. Ford makes F-150 pick-ups and Escapes at Claycomo. The Escape production line is going to be phased out. Other states have offered incentives to Ford to move that production away from Claycomo.

“We need to have all hands on deck if we’re going to make this happen,” Nolte says. “It’s vitally important that is happen this session. Some of these projects, like the Ford project, there is no real next year on this one.”

Nolte says Ford is making a decision now on what might replace the Escape production line and whether it will keep the production and the jobs in Kansas City. Ford employs nearly 4,000 workers at the Claycomo plant.

An incentive program to lure more manufacturing jobs to Missouri and to help the state keep the jobs it has passed the House Thursday on a 134-to-17 vote. The bill now moves to the Senate.

Rep. Jerry Nolte (R-Gladstone) says Missouri must compete with other states which are trying to lure manufacturing jobs. A qualifying factory would be allowed to retain half of its withholding taxes from retained jobs for 10 years. The manufacturing facility could also qualify for other state incentives, such as the Quality Jobs Program, Missouri’s premiere business incentive program. The jobs created would have to be high-paying with benefits.

Though the bill, HCS HB 1675,  is broadly written, it does have one large factory in mind: the Ford Claycomo plant in Kansas City. Ford will soon end production of the Ford Escape at the plant. Missouri hopes to attract the product line that will replace it and keep 4,000 jobs at the plant. Several other states have offered Ford tens of millions of dollars to shift production.

Ford makes the popular F-150 line of pick-ups at Claycomo and plans to maintain that production at the plant.