You are here: Home / Archives for deer hunting

Governor Jay Nixon (D) has vetoed two agriculture bills that, among other provisions, would have added captive deer to the definition of “livestock” in state statute, thereby putting them under the control of the Missouri Department of Agriculture rather than the Department of Conservation. His announcement of the vetoes focused on those provisions.

The provision is backed by the captive deer industry, who says regulations adopted recently that would ban importation of white-tailed deer and other cervids from other states, and enact tougher fencing requirements, could cause operators to shut down.

Proponents of the regulations say they are necessary to fight chronic wasting disease (CWD). The Conservation Department says CWD is not a threat to humans, but threatens the state’s deer herd, and the hunting industry tied to it.

The sponsors of those to agriculture bills, Representative Casey Guernsey (R-Bethany) and Senator Brian Munzlinger (R-Williamstown) say they believe the governor’s vetoes can be overturned. 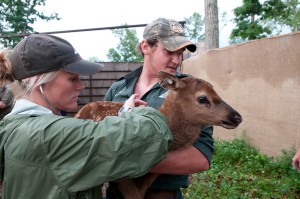 Kelly Straka, state wildlife veterinarian for the Missouri Department of Conservation, joins me on this final installment of our Google Hangout chats during the month of June.  For the past four weeks, we’ve focused on deer management and deer health.  In this week’s discussion we pay particular attention to Chronic Waste Disease or CWD.

CWD threatens Missouri deer, Missouri’s nearly 520,000 deer hunters, millions of wildlife watchers, thousands of landowners, 12,000 Missouri jobs, and hundreds of businesses and communities that depend on the $1 billion boost in economic activity related to deer hunting and watching.

As Kelly explains, CWD infects deer and other members of the deer family, called cervids. CWD is transmitted through abnormal proteins that attack the nervous systems of these species. CWD is spread both directly from deer to deer and indirectly to deer from infected soil and other surfaces. Animals with signs of CWD show changes in natural behavior and can exhibit extreme weight loss, excessive salivation, stumbling, and tremors.  The disease has no vaccine or cure. CWD is 100-percent fatal. Deer and other cervids can have CWD for several years without showing any symptoms. Once symptoms are visible, infected animals typically die within months.

Are we at harm and what steps can we take to insure our safety?  Kelly answers those questions and states that further research and testing continues.

“As of right now there is no evidence it can infect dogs, cats, even cattle or horses,” says Straka.  “There hasn’t been any examples of it infecting any other species outside of the deer family.  It can contaminate water supplies and the environment.”

However, Straka is quick to point out that while there are concerns, research continues.

“Just because some of these proteins may be shed in a water source, fortunately dilution will help a lot of that, but it is a concern.”  Straka adds, “As of right now, the Centers for Disease Control is doing a lot of research…there is no evidence that humans can be infected by CWD, but again it is a very active field of research.  Our best recommendation is using common sense when you’re field dressing an animal.”

Some of the tips include:

–Do not handle or consume any animal that is acting abnormally or appears to be sick.

–Contact your state game and fish department if you see or harvest an animal that appears sick.

–Wear latex or rubber gloves when field-dressing deer or other cervids.

–Bone out meat from the animal. Don’t saw through bone and avoid cutting through brain or spinal cord (backbone).

–Wash hands and instruments thoroughly after field dressing is completed.

–Avoid consuming brain, spinal cord (backbone), eyes, spleen, tonsils and lymph nodes of harvested animals. Normal field dressing coupled with boning-out a carcass will remove most, if not all, of these body parts. Cutting away all fatty tissue will remove remaining lymph nodes.

–Avoid consuming meat from any animal that tests positive for CWD.

There are also three dates remaining next week on the MDC’s Open House schedule. 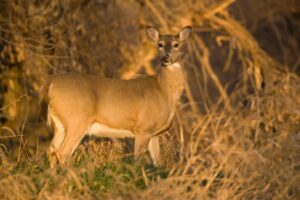 In our third of four installments of Google Hangouts with the Missouri Department of Conservation, we visit with Deer Biologist Jason Sumners. We continue our discussion on wildlife management and health, and what the responsibilities of the department are to manage those resources. Yet at the same time, it is important to remember that feedback from hunters and public citizens is crucial as to how the department can best manage our state’s resources.

The Conservation Commission, made up of four commissioners from two political parties, volunteer their time over six-year terms, and take a tremendous amount of responsibility in understanding that the people of Missouri entrust them to manage the fish, forest and wildlife resources of the state. The Commission has authority to make rules and regulations.

An interesting topic that we get into is the question of…Who owns wildlife? Jason does a great job of explaining that wildlife resources are owned by the people of the state of Missouri and entrusted to the government to manage those resources. Sumners explains what is known as the “North American Model,” as he goes on to describe a concept that dates back to Roman times, and how today those same basic principles are followed in seven key points.

It all ties back to finding a perfect balance, in particular to deer health and population.

Sumners talks about the department’s goal of using science based wildlife management to find a balance that provides recreational and hunting opportunities while limiting the risks or damage of an over abundant deer population. Sumners says it’s also very important that they receive public input.  The department sends out 35,000 random surveys to hunters after each season. They also survey 9,000 production land owners on an annual basis, trying to find a balance between what a good biological deer population looks like to what is socially accepted.

The Missouri Department of Conservation is currently looking for public feedback by continuing to host open houses across the state which run through July and includes the next event today (6/26) in West Plains at the Civic Center Exhibit Hall, on 110 St. Louis St.

Watch our Google Hangout with Jason Sumners and get more information below on how to voice your comments.

In addition to the open houses, the department also encourages you to fill out their comment card which can be found online at mdc.mo.gov/deerhealth

The Conservation Department says more than 4,400 deer hunters donated more than 227,000 pounds of venison during the 2013 hunting seasons through the state’s Share the Harvest Program. 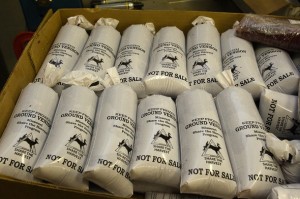 Venison processed through Share the Harvest is packed in one pound packages and distributed to food pantries and food banks statewide. (photo courtesy; Missouri Department of Conservation)

Share the Harvest allows hunters to donate part or all of a deer to food pantries and food banks in the state. More than 100 meat processors in Missouri take those deer and process them into ground venison.

Processing fees are covered in part or entirely by local and statewide program sponsors.

The program is administered by the Department and the Conservation Federation of Missouri. Since it began in 1992 it has provided more than 3.1 million pounds of venison to Missourians in need.