You are here: Home / Archives for Dave Nichols

The state legislature is asking Missouri voters if they want to raise the state sales tax to support transportation.

The Senate changed the proposal from a 1-cent sales tax increase to a three-fourths-of-one-cent increase and sent it to the House 22-10. The House on Wednesday approved that 105-43, meaning it will go on the statewide ballot in November unless Governor Nixon sets a special election date for it.

If passed it would generate an estimated $534-million dollars annually, running for ten years beginning in 2015.

The proposal is HJR 68

The Missouri Department of Transportation has said it will soon not have the money for road and bridge maintenance. It has already quit adding new projects to its five-year construction program and suspended a cost-share program, in which the Department split the cost of a project with local governments in the area it would impact.

Nichols writes, “Today is a great day for the future of transportation in Missouri. I would like to thank the General Assembly for passing this important legislation that gives Missourians the opportunity to improve our economy and keep our families safe by investing in much-needed transportation improvements.

“We are working with planning partners around the state and representatives from every mode of transportation to determine how this new revenue could best improve our total transportation system. We are ready to deliver the projects and services that Missourians expect and deserve.”

Those for and against asking voters for a temporary increase in the state sales tax to support transportation have made their cases to a House Committee. 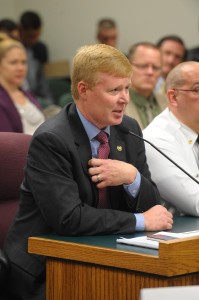 Even those who oppose a one-percent increase in the state sales tax to support transportation told a House Committee they understand that the Transportation Department needs more money.

Richard Sheets with the Missouri Municipal League says his members are concerned that a higher sales tax would make it harder to pass or renew local taxes.

“Many of the funds that cities use … the capital improvement sales tax … are sunset. They’re based on particular projects so they come back before the voters,” explains Sheets. “As the sales tax increases, my members concerns are that those issues would not prevail at the ballot.”

Jeanette Mott-Oxford with the Missouri Association for Social Welfare says she offered better solutions when she was a state legislator.

“For the 20-percent of Missourians that have household incomes of less than $17,000 a year, their total tax share is 9.6 percent of their incomes now,” Mott-Oxford says. “Part of that is sales tax, part is property tax, part is income tax, part is excise taxes … the full range of what we do. They have no discretionary income. They have a lot of month left at the end of their paycheck … they would really feel this increase.”

Supporters argue that the same low-income Missourians will be impacted no matter how the state looks to generate more transportation dollars.

Transportation Department Director Dave Nichols testified in support of the proposal. He tells lawmakers its proceeds would not be limited to funding roads.

“Missourians all across the state, whether you’re in a rural area or an urban area, have told us that we need to have dedicated state funding for other modes of transportation,” says Nichols. “This solution that Representative (Dave) Hinson has brought to you today has that built-in … that there are dollars that can be used for any transportation purpose in our state.”