You are here: Home / Archives for Dardenne Prairie

Legislation that would allow St. Louis City police officers to live outside the city is expected to be voted on Tuesday evening in Jefferson City, by the Missouri House Judiciary Committee. 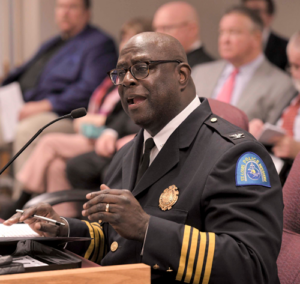 The bill is a top priority for St. Louis Mayor Lyda Krewson (D) and the city’s police chief, as well as for state Attorney General Eric Schmitt (R).

St. Louis Police Chief John Hayden traveled to Jefferson City last week to testify for the bill, saying the residency requirement is the greatest challenge the department has with recruitment and retention.

“We have the greatest need for officers and the most demanding criminal environment in the state of Missouri, yet we have the greatest barrier to becoming an officer by discouraging applicants with the residency requirement,” Hayden tells lawmakers.

Chief Hayden testifies the department is currently down 138 officers, emphasizing that’s both an officer safety issue and a public safety issue. He says having more officers will increase public safety.

Hicks describes St. Louis as the murder capitol of the nation. He testifies that the residency requirement is hurting officer recruitment, which impacts public safety.

“Right now, we are lacking I believe it’s close to 150 pairs of boots on the ground, in our law enforcement community in St. Louis City,” says Hicks.

There is opposition to the bill, from some members of the St. Louis Board of Aldermen and from some residents. Critics say it’s important to have police officers who live in and know the neighborhoods they patrol.

The one resident who testified against the bill at last week’s hearing said the issue should go to a citywide vote in St. Louis, adding that Representative Hicks’ home in Dardenne Prairie is two counties away.

Hicks tells Missourinet that the St. Louis Board of Aldermen opposed the bill and that Mayor Krewson and Chief Hayden came to him to request help. Hicks also says the title of his office is State Representative, not Dardenne Prairie.

As for Attorney General Schmitt, he says the residency requirement for St. Louis Police officers stifles recruiting efforts and has led to a downturn in the number of officers working in the city. Schmitt emphasizes that the bill doesn’t prevent officers from living in the city.

Hicks testifies he believes there is a “path to passage” in the Senate, and says Governor Mike Parson (R) told him that he would sign the legislation, if it reaches his desk.

Click here to listen to Brian Hauswirth’s full interview with State Rep. Ron Hicks, R-Dardenne Prairie, which was recorded on January 14, 2020 at the Statehouse in Jefferson City: