You are here: Home / Archives for crime and crash scenes

Legislation aimed at providing forensic investigators with better access to crime and crash scenes has been filed by a mid-Missouri state lawmaker. 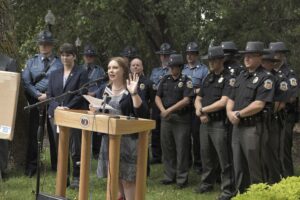 State Rep. Sara Walsh, R-Ashland, says forensic investigators often can’t get past the vehicles backed up at the scene.

“It would allow forensic investigators, coroners and medical examiners to display fixed, flashing or rotating red or blue lights on their vehicle when they’re responding to a crime scene or accident,” Walsh says.

Under current Missouri law, forensic investigators are not authorized to use lights or sirens when responding to scenes. Walsh notes that in some interstate traffic fatalities, vehicles are backed up for miles.

“If they (forensic investigators) are in their personal vehicle responding at late hours, a lot of folks that are there waiting in the traffic backup just think they are an impatient citizen, when they really need to get to the head of the line to be able to do their work,” says Walsh.

She notes that law enforcement officers cannot finish their work, until the forensic investigator has arrived and finished his or her work.

Walsh represents Boone, Cole, Cooper and Moniteau counties in the Missouri House, and chairs the House Subcommittee on Appropriations for Public Safety.

She credits local central Missouri forensic investigators and Columbia Police Officers Association (CPOA) Executive Director Dale Roberts for bringing this issue to her attention. Roberts is a constituent in her district.

Walsh predicts the bill will have other benefits as well.

“There might even potentially it could help solve the problem of secondary accidents, because anytime you’ve got traffic backups sometimes folks will run into traffic not seeing that it’s stopped,” Walsh says.

Walsh describes her two-page bill, House Bill 380, as bipartisan. She’s hopeful it will pass in January.

Click here to listen to Brian Hauswirth’s full interview with State Rep. Sara Walsh, R-Ashland, which was recorded on December 9, 2020: