You are here: Home / Archives for Corning

A congressman who represents northern Missouri says it’s been about 500 days since the Flood of 2019 began, and that thousands of acres of the world’s most fertile farmland are still covered under water or silt and sand. 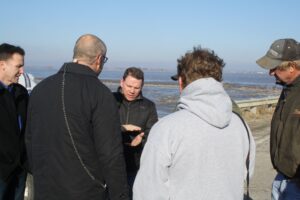 “Craig, Missouri being one of those,” Graves says. “Corning, Missouri another. Those are just two that are in Holt County.”

Holt County saw record flooding in 2019, which covered heavily-traveled Highway 159. Graves says some residents there have lost their farms and homes, multiple times.

The Missouri Farm Bureau says more than 1.4 million acres of farmland in the state went unplanted in 2019, due to flooding. One of the hardest-hit areas was in Holt County.

Graves, the ranking Republican on the U.S. House Transportation and Infrastructure Committee, is critical of the U.S. Army Corps of Engineers. He says flood control and navigation should be the Corps’ top priority for the Missouri River.

He says 578-million tons of goods are shipped by barges annually.

Congressman Graves and Governor Mike Parson have both criticized the Corps. Parson and the governors of neighboring Kansas, Iowa and Nebraska have met with the Corps at least three times, to discuss what needs to be done differently in the future.

Graves tells Missourinet that some towns in his district are still behind temporarily-repaired levees.

“In many cases too, they’re building back to the exact same criteria that was there before,” says Graves.

Graves is optimistic that Congress will approve a major water resources bill before the November election. He says the bipartisan bill is aimed at helping communities impacted by repeated flooding.

“I think it will go very easily off the floor of the House. Again, it was unanimous out of committee, and then it will go over to the Senate and then we’ll work it out in conference,” Graves says.

He says the bill gives towns more help in planning and implementing flood control projects that limit the risk of future floods.

Click here to listen to the full eight-minute interview between Missourinet’s Brian Hauswirth and U.S. Rep. Sam Graves, R-Tarkio, which was recorded on July 17, 2020: