You are here: Home / Archives for Cori Bush

A St. Louis couple who pulled their guns on protesters walking along their private street in June were featured last night during the Republican National Convention. Mark and Patricia McCloskey, both personal injury lawyers, called the protesters “an out-of-control mob causing chaos in the streets.” Patricia McCloskey says “your family will not be safe in the Radical Democrats’ America. 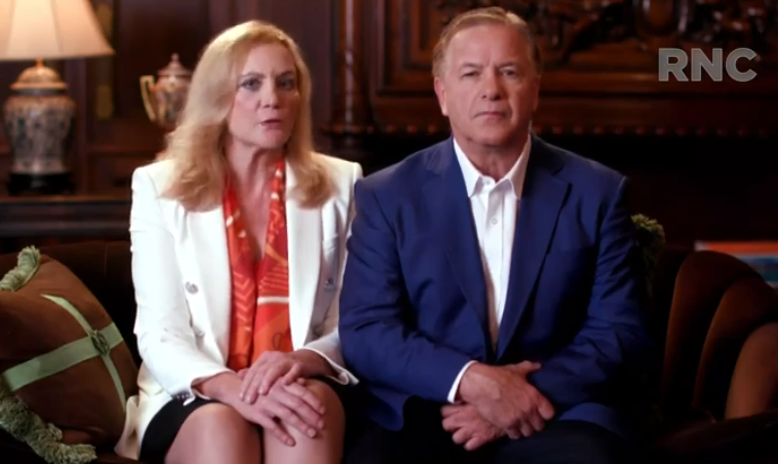 “They are not satisfied with spreading the chaos and violence into our communities, they want to abolish the suburbs all-together by ending single-family zoning,” says Patricia McCloskey. “This forced rezoning would bring crime, lawlessness and low-quality apartments into thriving suburban neighborhoods. President Trump smartly ended this government overreach, but Joe Biden wants to bring it back. These are the policies that are coming to a neighborhood near you.”

The McCloskeys suggested they are the victims for getting charged with felonies after using guns to defend their property. In July, St. Louis Circuit Attorney Kim Gardner’s Office charged the couple with one felony count each of unlawful use of a weapon — exhibiting.

“It is illegal to wave weapons in a threatening manner at those participating in nonviolent protest, and while we are fortunate this situation did not escalate into deadly force, this type of conduct is unacceptable in St. Louis,” Gardner said.

Gov. Mike Parson, Missouri Attorney General Eric Schmitt and U.S. Sen. Josh Hawley have all come to the defense of the McCloskeys. Parson says President Donald Trump and U.S. Attorney General William Barr are reviewing the event. The governor suggested Gardner should be removed from office.

Mark McCloskey called out one of the protesters, Democratic Congressional candidate Cori Bush.

“The Marxist liberal activist leading the mob to our neighborhood stood outside of our home with a bullhorn screaming, “You can’t stop the revolution,” says McCloskey. “Just weeks later, that same Marxist activist won the Democrat nomination to hold a seat in the U.S. House of Representatives. In the city of St. Louis, that’s the same as winning the General Election. That Marxist revolutionary is going to be the next Congresswoman from the first district of Missouri. These radicals are not content with marching in the streets. They want to walk the halls of Congress. They want to take over.”

Bush is poised to be the first African-American Missouri woman to serve in the U.S. House. 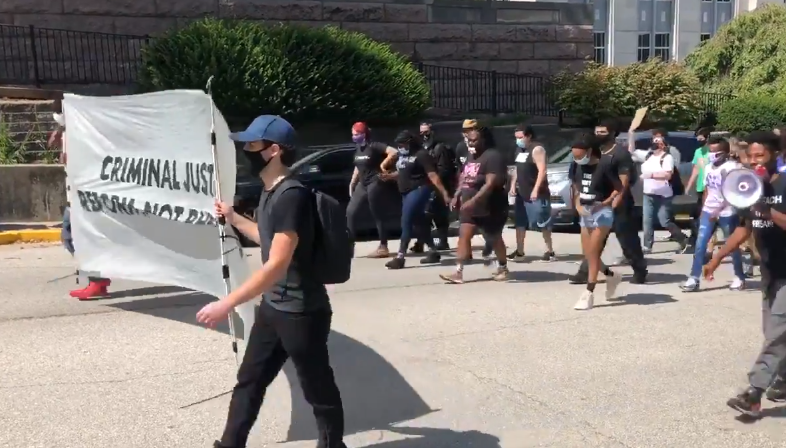 Protesters marched the streets in the heart of Jefferson City today to voice their opposition to the governor’s crime package. They walked down High Street in front of the Missouri Capitol and made a pitstop at the Governor’s Mansion. Police were on the scene to try and keep protesters from blocking the streets.

Gov. Mike Parson’s special session crime plan would let judges choose whether children 14 to 18 years old should be tried as adults for certain weapons crimes. It would also allow the Missouri attorney general to prosecute some St. Louis murder cases. Parson says out of at least 161 St. Louis murders so far this year, 33 suspects have been charged. 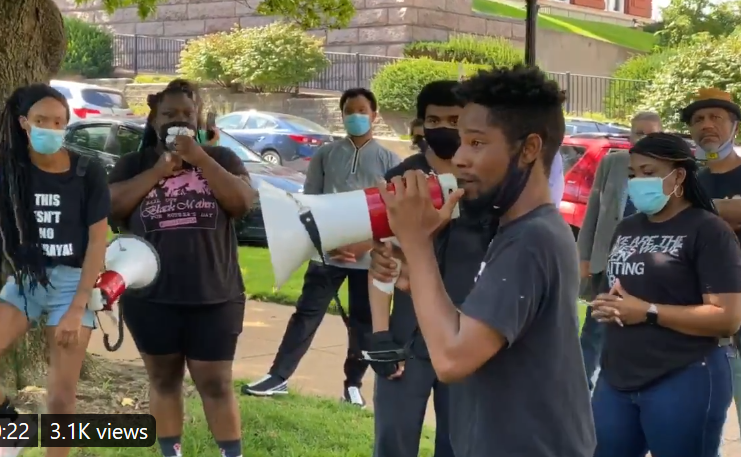 “Charge them as an adult because that is how we are going to fix violence – by being tough on crime to individuals that have made a mistake and should be held accountable but you are charging our youngest babies,” says Aldridge. “When does we go to ten? When do we go to nine? What’s going to be next? Eight? Seven? Are we locking up literally babies and putting them in jail with serial killers?” 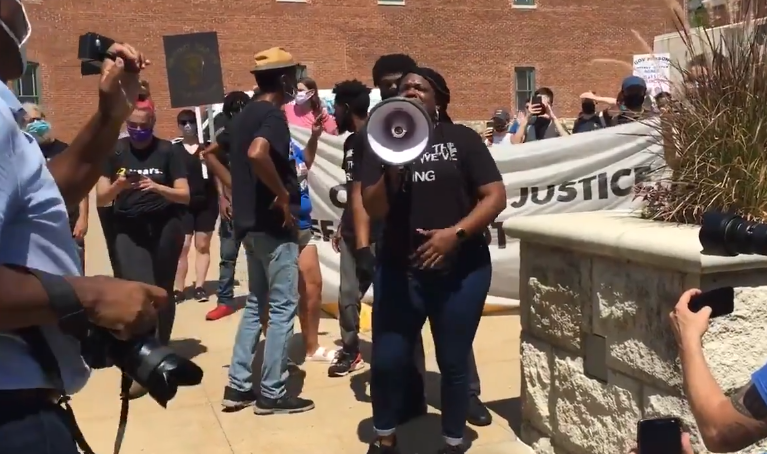 Cori Bush of North St. Louis County, who defeated longtime St. Louis Democratic Congressman Lacy Clay in this month’s primary election, was among the crowd of protesters. They marched to the Cole County Jail and Bush had a message for law enforcement.

“We are about saving lives,” she says. “And so if you think we want to destroy your property – we don’t. If you think that we want to just disrupt just to disrupt – we don’t. We’re disrupting because you won’t stand up and do the right thing and make sure your work is to save lives.”

The legislation would also scrap a requirement for St. Louis police officers to live within the city and would create a witness protection fund to compel more witnesses to come forward in crime cases.

The Missouri House of Representatives gets back to work next week on the legislation. Three committees have scheduled hearings for Monday afternoon. 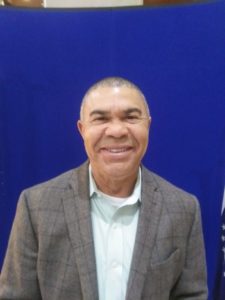 Clay represents St. Louis City and parts of St. Louis County in Congress. There were 194 homicides in St. Louis in 2019, including the shooting deaths of at least 13 children.

A recent study published by “USA Today” listed St. Louis as the 5th most dangerous city in America.

“If it means that they need a budget item, a line-item, to actually protect these witnesses more, to maybe move them out of town, before a trial,” says Clay.

There have been teen witnesses to St. Louis homicides in recent years who have been killed, before they could testify.

That includes the highly-publicized “St. Louis murder mom” conspiracy case. The “St. Louis Post-Dispatch” reported this month that 23-year-old Tyrell Davidson was sentenced to 12 years in prison for second degree murder, for that case.

“And that would better protect these witnesses, will probably get them to come forward and to testify and to get these bad guys off the street,” Clay says.

This past weekend in Clay’s district, kindergartner David Birchfield III was shot to death when a gunman shot into his car. David, who was six, was killed. His nine-year-old sister was also shot.

Clay is also focused on economic development and jobs, including the NGA project, which he notes is the largest single federal government investment in St. Louis history.

“Welcome to a historic day at the corner of Jefferson and Cass,” Clay said at the November groundbreaking ceremony. It’s a $1.7 billion project.

Clay was first elected to Congress in 2000. He won re-election in 2018, beating Republican Robert Vroman with about 80 percent of the vote.

Northwoods Democrat Cori Bush has filed to challenge Clay in the Democratic primary. No Republicans have filed yet.

Click here to listen to the full four-minute interview between Missourinet’s Brian Hauswirth and U.S. Rep. Lacy Clay, D-St. Louis, which was recorded on February 25, 2020 at the Kirkpatrick Building in Jefferson City: