You are here: Home / Archives for Conservation of Sculpture and Objects Studio

Hundreds of people turned out this weekend in downtown Jefferson City to view a renovated statue that normally sits 260-feet above the ground at the Missouri Capitol. 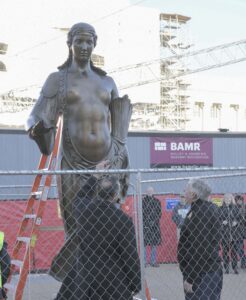 “And she’s all dressed up, she’s pretty to go back up on top on top of our state Capitol and represent all of us here in the state of Missouri,” Parson says.

The ten-foot sculpture weighs more than 1,400 pounds. It was on top of the Capitol from October 1924 to November 2018, when restoration began. Ceres was taken to the Conservation of Sculpture and Objects Studio (CSOS) for cleaning and refurbishing. The CSOS is located in Forest Park, Illinois.

The Missouri Office of Administration (OA) says the statue was struck by lightning about 300 times between 1924 and 2018, mainly atop the head.

Despite cold temperatures Friday, about 100 people turned out for the unveiling event. Governor Parson tells Missourinet he’s impressed with the crowds that turned out.

“It’s cool out here today but for Missouri in December, it’s not bad,” says Parson. “The sun is shining. It’s still a beautiful day here.”

The Ceres restoration cost about $400,000, all part of a massive $50 million renovation project at the Capitol aimed at addressing deteriorating stonework on the facades, dome and drum, which was completed in 1917.

Ceres is expected to be lifted up to the top of the Capitol again next week, but at least one Missouri lawmaker is calling on the governor to stop that from happening.

“God commanded the Israelites to ‘have no gods other than him.’ He also said, ‘Do not make metal gods for yourselves. I am the Lord your God. Governor Parson, you and I have placed our trust in the same Lord, the God of the Bible. As such, I appeal to your good judgment, as a follower of Jesus Christ, to direct the Capitol Commission to not return the false god Ceres, the Roman goddess, to the top of the Capitol dome,” State Rep. Mike Moon, R-Ash Grove, writes, in part.

Representative Moon says “we serve a mighty God and we have need for no other god(s).” Moon also says that those who would oppose placing a statue of Jesus on state property would supporting placing what he calls “a false god” on the Capitol dome.

Click here to listen to the full interview between Missourinet’s Brian Hauswirth and Governor Mike Parson, which was recorded outside the Missouri Capitol in Jefferson City on December 6, 2019: