You are here: Home / Archives for Congressman Sam Graves

Gov. Mike Parson delivered today his State of the State address to the Missouri Legislature. Parson outlined themes at the forefront of his administration – jobs, workforce development, infrastructure, and making a brighter future for Missouri’s young people. 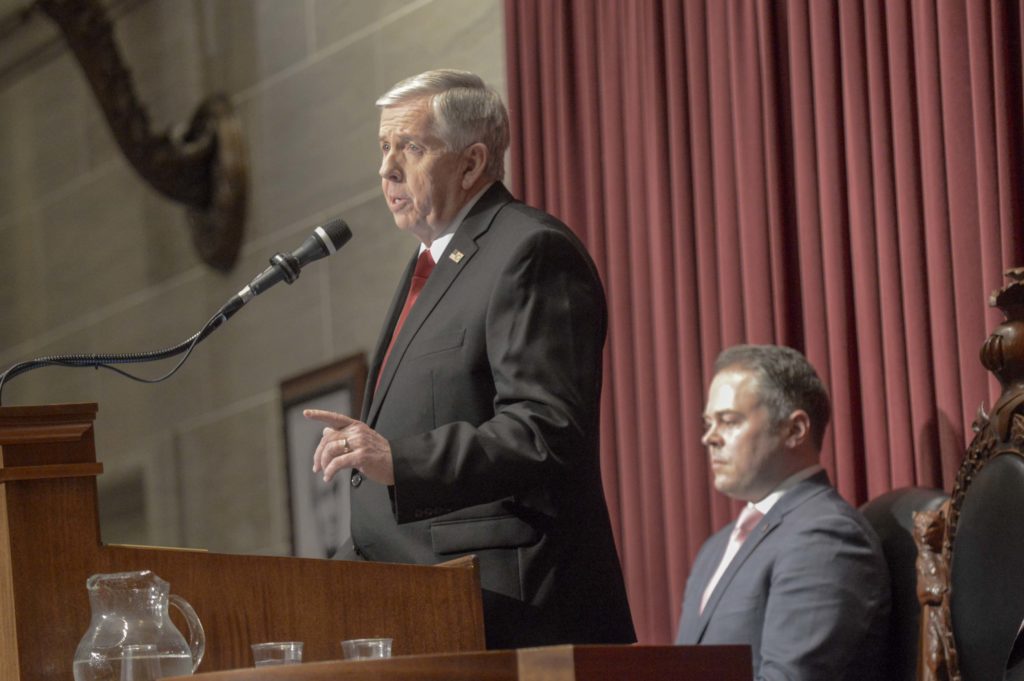 He touted the state’s low unemployment rate and some of his accomplishments while in office, including job expansions at Bayer, General Motors, Nucor Steel, Bunge, Briggs & Stratton, Dollar Tree, Aurora Organic Dairy and the USDA offices in Kansas City.

“That is why I am confident telling you today that the state of our state is strong and by working together, we will be ready for an even better future,” says Parson.

Let’s cut to the chase for the lowest paid state workers in the nation – Parson is proposing another pay increase for most of them. The Missouri Transportation and Conservation Departments are not included in the proposed 2% pay bump because those departments work under a different pay boost system.

Parson unveiled today his $30 billion state budget proposal for the fiscal year beginning in July. It includes the elimination of 325 full time equivalent state worker vacancies – no layoffs. The Labor and Industrial Relations Department would get rid of 124 positions and Department of Corrections would slash 137. The other vacancies being tossed are from other state agencies.

The governor says Missouri is “creating a new horizon of opportunity for infrastructure.” He says funding to fix or replace 250 Missouri bridges has led to some of the most exciting infrastructure investments. Parson rolled out the plan during last year’s State of the State address and the Legislature signed off on it.

“By combining our bridge proposal with federal funding secured by Congressman Graves, Missouri is now on track to significantly reduce the number of deficient bridges in the 6th Congressional District, which encompasses nearly half of our entire state,” says Parson.

Missouri’s four largest cities – St. Louis, Kansas City, Columbia and Springfield – have all made rankings for their violent crime rates. With the mayors and police chiefs of these cities in the audience, Parson said he wants Missouri’s laws strengthened that target violent criminals, like gun ownership restrictions for minors and domestic abusers.

“I have never waivered in my support for the Second Amendment. But we all have to understand the very real issue of violent crime affecting our neighborhoods and the potential consequence of doing nothing,” he said.

Some state lawmakers are not on board with the idea and say such measures would violate the Second Amendment.

He also wants $22 million owed to counties for transporting jail inmates and holding offenders who end up going to state prison. Another $824 million would go to the Missouri Department of Corrections to fund the state’s 21 prisons, overtime pay for correctional officers, treatment programs and efforts to retain workers and keep prisoners from reoffending, etc.

The Public Defender System’s budget faces about $8 million reduction compared to the current fiscal year. Most of the cut would be to services provided to Missourians who can’t afford their own legal representation. The office handles roughly 80,000 legal cases per year.

As for making a brighter future for Missouri’s young people, Parson wants $3.56 billion in base funding for K-12 public schools – a $10 million increase compared to the current fiscal year. He’s proposing to boost school transportation spending by $10 million to an overall $117 million.

According to Parson, about 30% of Missourians have a four-year degree from a college or university. The governor says society needs to move away from the stigma that not having a college degree is a failure. He’s seeking $750,000 to certify about 12,000 new high school students as work-ready.

“This is a major step that could open doors to students not sure if college is in their immediate plans, but still put them on a path to greater opportunities,” says Parson.

Parson says about 30% of Missouri’s population has a four-year degree from a college or university. He wants the state to work to expand access to virtual education for high school students and those who are home schooled.

Meanwhile, the governor’s budget blueprint would give the same level of funding as the current fiscal year for Missouri’s colleges and universities – about $927 million.

Parson is asking lawmakers for a $4.4 million boost to fund his signature Fast Track workforce incentive grant. The additional funding would open the door for applicants attending Missouri’s private colleges and universities.

Fast Track is designed to fill Missouri’s greatest workforce needs by covering the full cost of schooling for adults 25 or older pursuing a certificate, credential or bachelors in a high demand field. The program is primarily for adults 25 years or older, but some provisions allow Missourians younger than 25 to get grants if they have been out of school for at least two years.

The governor is also requesting an extra $4.8 million to fund the A+ scholarship program.

Now that Parson has sketched his financial wishes, the Legislature can get to work on crunching the numbers. Budget hearings could begin as early as next week.

Gov. Parson has kicked 100,000 Missouri children off their healthcare. He created this problem and has resisted every opportunity to fix it. Our state deserves better than that.

Watch my official response to Gov. Parson’s State of the State response here:https://t.co/8HSwpuzU7K