You are here: Home / Archives for Concord Baptist Church

Missouri lawmakers will return to Jefferson City on Wednesday for the start of the 2021 session. Both the Senate and House will gavel-in at noon.

The COVID-19 pandemic is expected to be the major issue again this session, like 2020. Missouri’s current operating budget is about $38 billion, which includes two major supplemental budgets with federal money. 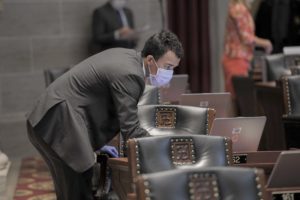 Republicans will control the Missouri Senate 24-10 this session. That’s a supermajority.

Razer, Rehder, Moon and Roberts were elected to the Senate in November.

The Republicans also have a supermajority in the Missouri House this session, 114-47. There is one vacancy that was created when then-State Rep. Kip Kendrick, D-Columbia, resigned to become chief of staff for Senator-Elect Razer.

The House Wednesday is expected to elect the first Speaker in state history from eastern Missouri’s Arnold. State Rep. Rob Vescovo (R) has served as the House Majority Floor Leader for three years. Vescovo was first elected to the House in 2014 and will be starting his fourth term.

Vescovo is a former member of the Jefferson County Port Authority.

Springfield Republican Elijah Haahr served as Speaker from November 2018 until last Thursday, and has termed out of the House. 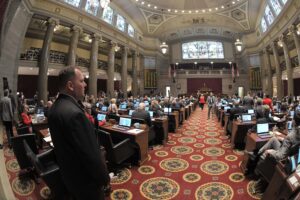 Secretary of State Jay Ashcroft (R) will briefly preside over the House on Wednesday, once session begins. The House will then elect a temporary speaker from the chamber, who will preside over the vote for Speaker.

All Missouri House members will be sworn-in on Wednesday. That will include 46 new members who have never served before. It also includes the six members who were elected during November 2019 special elections. They are State Reps. Yolanda Young, D-Kansas City, Rasheen Aldridge, D-St. Louis, Mark Sharp, D-Kansas City, Trish Gunby, D-Manchester, Mike Person, D-Ferguson and Scott Cupps, R-Shell Knob. Young, Aldridge, Sharp, Gunby, Person and Cupps were re-elected in November.

There will also be a bipartisan legislative prayer service Wednesday morning in Jefferson City, to mark the start of session. It will take place at 9 a.m. at Concord Baptist Church, which is across the street from Capital Mall. There will not be a breakfast this year.

Missouri’s governor will be participating in a legislative prayer service Wednesday morning in Jefferson City. The service marks the beginning of the legislative session. 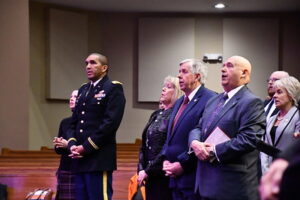 The 2021 session begins on Wednesday at noon at the Statehouse in Jefferson City. The special prayer service starts at 9 a.m. at the Concord Baptist Church, which is near the Capital Mall.

The annual prayer service is a time for prayer for Missouri’s state leaders, in both political parties. State lawmakers from both parties attend the event.

Missouri Baptist Convention President and Board Chairman John Nelson will be speaking at Wednesday’s service, and several pastors will pray.

The group “Jubilee Rising” will be performing at the prayer service. They are from the Lake of the Ozarks.