You are here: Home / Archives for Common Core Standards

The state House has turned a bill that would have completely scrapped in Missouri the Common Core education standard into one that will give it a chance, while developing its potential successor. 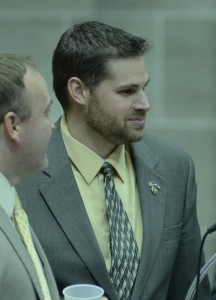 The original bill filed by Representative Kurt Bahr (R-St. Charles) would have prevented the implementation of Common Core State Standards in Missouri without legislative approval. The bill was amended on the House floor to allow those standards to progress while a commission is created to create a new standard.

Bahr says the amendments came from language the Senate is considering.

“We’re going to create the process in which we’re going to look at the standards and say, ‘How do we want to move forward for standards for the State of Missouri?'” Bahr tells Missourinet. “Are we simply going to blanketly accept Common Core standards or are we going to have Missouri standards written by Missouri teachers, Missouri parents and the stakeholders within Missouri and then change our assessments so that they are in-house?”

Some lawmakers who say they didn’t oppose Common Core did have problems with how its impact would be assessed, saying teachers might have suffered poor evaluations as a result of poor student performance while adjusting to the new standards. One of the amendments to the bill would prevent assessment test scores from the 2014-15 school year from counting toward school accountability or accreditation. 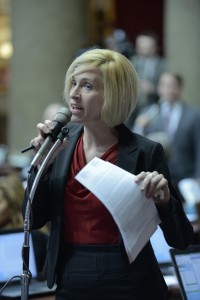 “I think this sort of alleviated some of the members’ concerns,” says Representative Genise Montecillo (D-St. Louis). She says with the changes approved Tuesday the bill, “was a good compromise and it doesn’t put districts in a bind that they have to dismantle what they’ve been working towards.”

The proposal would create a 14-member work group with members selected by the state’s professional teachers’ organizations, associations of state school boards and charter schools, the speaker of the House, the Senate president pro-tem, the governor, the lieutenant governor, the commissioner of higher education and the heads of state-approved baccalaureate-level teacher preparation programs.

That group will develop standards for English, language arts, math, history and government and present recommendations to the Board of Education next year. Those standards would then be implemented in the 2016-17 school year.

Bahr says during the two years before implementation, while Common Core is in place in Missouri, it will be evaluated and recommendations could include partial or full implementation of it.

The proposal would need another favorable vote to go to the Senate.

A day after one House Committee proposed budgeting for tin foil hats to make a statement about opposition to Common Core Standards for public education, another House Committee will hear a proposal to bar the implementation of those standards in Missouri. 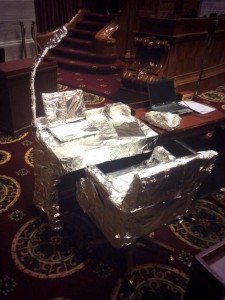 The provision was inserted by the committee’s chairman, Representative Mike Lair (R-Chillicothe), who intended it to suggest that some lawmakers’ opposition to the Common Core Standards is based on paranoia.

Some opponents of Common Core tie it to things like the collecting of data on students and indoctrination of children.

Lair told the committee, “When you deal with conspiracy theorists, you do logic first.”

He noted legislation he filed that would limit the sharing of data and that would prevent the Department of Elementary and Secondary Education (DESE) from mandating curriculum or textbooks.

“If you can’t deal with folks with logic,” Lair continued, “I always felt you use humor.”

The jibe may have earned Lair a measure of in-kind retribution. A photo circulated late Wednesday night on Twitter showed his desk in the House of Representatives’ Chamber covered in tin foil, along with his chair, laptop, voting box and microphone stand. 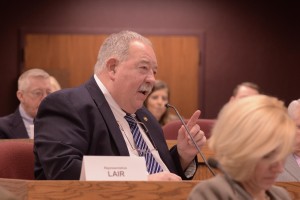 The appropriation bill containing the $8 for tin foil goes to the full House Budget Committee for consideration.

Thursday the House Committee on Elementary and Secondary Education is scheduled to hear a bill filed by Representative Kurt Bahr (R-St. Charles) that would prevent the State Board of Education from adopting and DESE from implementing Common Core State Standards. It would void all actions taken to adopt those standards after its effective date, August 28, and would make any statewide education standard subject to the approval of the General Assembly.

That hearing is scheduled to begin 30 minutes after the House adjourns for the morning in House Hearing Room 3, in the Capitol basement.