You are here: Home / Archives for Columbia Cougars 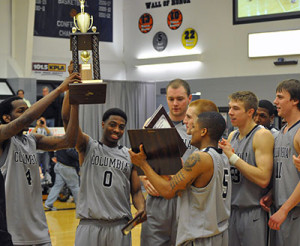 It’s an exciting time for fans of  Columbia Cougars basketball…not just with the men’s team, (who by the way are 33-0 and ranked number one in the nation), but women’s basketball is heading down to Frankfurt, Kentucky as a #4 seed in the NAIA Division I National Tournament.

Bob Burchard is not only the men’s basketball coach, but also the athletic director. He joins us on this Pressbox Podcast to talk about the success of both programs and how he’s handled dealing with a perfect season with his players.

It may sound boring, but all teams approach a season by taking it “one game at a time.” How many times have we heard that? It’s true and Burchard hasn’t gotten wrapped up in the 33 straight wins, but more on the process of  getting his team better each game.

He admits he can’t grasp how the team has gotten this far without a loss. You’ll hear Bob explain how there are four potential outcomes to each basketball game.  When you hear Bob lay out the different scenarios, it makes any win streak sound amazing.

END_OF_DOCUMENT_TOKEN_TO_BE_REPLACED

The No. 1 ranked Cougar men’s basketball team earned a 68-54 road victory over American Midwest Conference (AMC) opponent Park (MO) University on Saturday afternoon. Columbia improves to 24-0 overall and 10-0 in conference play with the win and also remains the NAIA’s last remaining unbeaten team of the 2012-13 season.

The Cougars shot just over 40 percent from the field in the first period, but knocked down seven of 15 shots from three-point range to grab a 35-29 lead at the halftime break. Sophomore Tanner Sutton hit three of five attempts from behind the arc on his way to nine points in the opening frame.

After allowing Park to hang around for much of the second half, Columbia would take their largest lead at 60-47 of the contest on a Zach Rockers three-pointer at the 8:02 mark. With a ten point lead and just under two remaining, Derrick Dilworth picked up a key steal that lead to a quick basket by Devin Griffin. Griffin turned around and stole the inbound and was able to take more time off the clock and secure the victory for the Cougars.

The Cougars will resume AMC action when they travel to league newcomer Benedictine University of Springfield (IL) on Thursday, February 7th. Columbia defeated the Bulldogs 73-40 in the teams’ first meeting of the season on January 10th.