You are here: Home / Archives for Columbia-based Emery Sapp and Sons

The state Department of Transportation (MoDOT) says the massive project to replace the aging I-70 Rocheport bridge in mid-Missouri is still in the planning phases. MoDOT Director Patrick McKenna says the agency is making good progress on a related project to build one-point-two miles of truck climbing lanes on I-70 at east-central Missouri’s Mineola Hill. 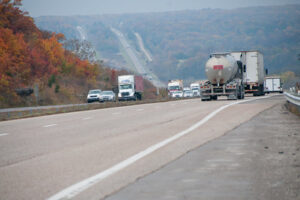 “And we’re hoping by the end of the calendar year, we’re actually going to have a climbing lane at Mineola Hill,” McKenna says.

In 2019, MoDOT received an $81 million federal Infrastructure for Rebuilding America (INFRA) grant for the I-70 Rocheport bridge replacement and for the I-70 Mineola Hill truck climbing lanes. MoDOT says the Mineola Hill climbing lanes will generate safety and mobility benefits for both cars and trucks that travel at different speeds along that segment of I-70, which is in Montgomery County.

MoDOT says work will begin next Monday to add a third lane to both eastbound and westbound I-70 at Mineola Hill. MoDOT crews will be on-site to begin setting traffic control, as well as setting erosion control.

“We have substantial additional work on environmental work and engineering, before we get to the point of putting out an RFP for construction services on that,” says McKenna.

Construction at Mineola Hill is expected to be done by next fall. Columbia-based Emery Sapp and Sons is the prime contractor, and Barlett and West is handling design services.

As for the I-70 bridge in Rocheport, more than 12 million vehicles cross it every year. That includes three million trucks.

“And that equals to about 100 million tons of freight, which equals more than $154 billion annually so many trucks,” U.S. Rep. Vicky Hartzler, R-Harrisonville, told Missourinet in 2019.

Rocheport, which is just west of Columbia, is in Congresswoman Hartzler’s district. The current Rocheport bridge is 60 years old, and MoDOT says it’s in poor condition.