You are here: Home / Archives for college

Southeast Missouri (2-3, 1-0) held Murray State (1-4, 0-2) to only one touchdown in a 27-10 victory during its Ohio Valley Conference opener at Houck Stadium Saturday.

Southeast’s defense dominated a high-powered MSU offense that entered the night averaging 467 total yards. The Redhawks stopped the Racers three times on fourth down and ended three of their drives in the red zone. In the end, that was the difference.

“It was won in the red zone,” said Southeast head coach Tom Matukewicz. “We had phenomenal defense and knew we had to play well in the red zone. We did that. Murray State’s skill is off the charts and we tried to stay in front of them.”

The Redhawks forced two turnovers, including one on MSU’s opening drive of the game.

Indiana State used a dominant second-half performance against Missouri State to pull away for a 56-28 Missouri Valley Football Conference victory over the Bears Saturday afternoon at Robert W. Plaster Stadium. The No. 24 Sycamores (3-1, 1-0 MVFC) scored 28 unanswered points to overcome a second-quarter deficit and racked up 516 yards of total offense over the final three periods of play.

Missouri State (1-3, 0-1 MVFC) posted a strong start against the nationally-ranked Sycamores, using a pair of early Calan Crowder touchdown runs to take a 14-7 lead in the second quarter. The Bears finished with a season-high 197 passing yards thanks to junior quarterback Brodie Lambert, who completed 26-of-43 attempts, including a late eight-yard scoring pass to Zac Hoover.

But ISU quarterback Matt Adam spearheaded the Sycamores’ rebound, completing 27-of-38 passes for 265 yards and four touchdowns, as the visitors outgained the Bears by 326 yards over the final three periods.

Once Division II’s third ranked Northwest Missouri State overcame its one miscue in the first half, it played near perfect football against Northeastern State Saturday afternoon at Doc Wadley Stadium.

It was quite simply the best half of football for the Bearcats since they beat Missouri Southern by 41 at Bearcat Stadium on Sept. 10.

The 59-7 road win by Northwest over Northeastern University ended a two-week run of second half comebacks. From the opening kickoff to the final second, the Bearcats dominated.

A sluggish first half put Missouri S&T in a hole it was unable to get out of Saturday afternoon, as the Miners suffered their first loss in Great Lakes Valley Conference play with a 40-16 loss at William Jewell.

The Miners and Cardinals were almost dead even in terms of yardage, but five turnovers by the Miners helped to seal their fate as they missed a chance to move to 3-0 in league play and instead fell to 2-3 overall and 2-1 in the GLVC. 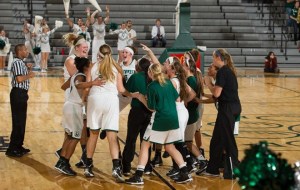 Northwest Missouri outscored Southwest Baptist 8-3 in the final minute of overtime as they earned a victory at home. NWMSU got 17 points off of turnover as they moved to 6-2 in the MIAA this season.

For the Griffons Sarafina Handy had 20 points and LaQuinta Jefferson finished with 20 points and dished out five assists. Chelsea Dwewy was also in double figures with 14 points and Friday Chuol pulled down nine rebounds. For the Jennies Shelby Winkelmann had 16 points and Jasmine Thompson had 13 points while pulling down seven rebounds. Danielle Barry and Justina Prairie Chief each finished the game with 10 points.

#25 Central Missouri used a 9-0 run in the second half to put the game away for good and defeat Missouri Western on the road. UCM had 13 points off of turnover and 12 second chance points as they moved to 5-3 in league play.

Saving for college is on the minds of a lot of parents as their children head back to school. State Treasurer Clint Zweifel wants Missourians to remember the MOST 529 program can help them do that.

529 plans are usually sponsored by a state and help families save for higher education and can pay for tuition, books and room and board fees. They can be started for as little as $25.

Zweifel this time of year, college savings are on the minds of a lot of parents. “Back to school is an important time. It’s an important time also as we get toward the end of the year and December as people begin thinking about financial planning for the coming year.”

Zweifel says paying for college can be a shock to those who haven’t dealt with it for a while, but even moreso for those who have never done it before.

“Think about the experience that many Missourians have, which is what I had, I was the first person in my family to walk onto a college campus and attend college. So, think about the challenges for those families that don’t understand the network that exists, don’t understand all the tolls that exist. If it’s hard for the families that have experience with college, it’s even harder for those that haven’t.”

Even in recent years that have been marked by a tight economy, Zweifel says Missourians have continued to build on their MOST accounts. “We now have about $1.8 billion in assets. 135,000 Missourians are saving for college using MOST.”