You are here: Home / Archives for Cole County Sheriff’s Department

More than 100 needy children in mid-Missouri’s Cole, Callaway and Osage counties have Christmas presents for themselves and their families, thanks to the annual Operation T.O.Y.S. event at Jefferson City’s Walmart East. 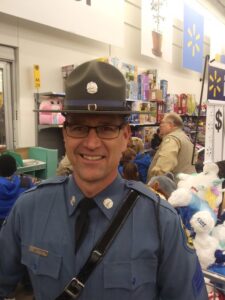 Saturday’s event featured a law enforcement convoy stretching more than a mile-and-a-half long, with lights and sirens activated. Operation T.O.Y.S., which stands for Taking Our Youth Shopping, is an opportunity for children who otherwise would not be able to celebrate the holidays.

“I’ve been doing this for 20 years and I just love doing this,” Martin says. “It’s about the kids, it’s how we can give back to the kids.”

Fundraising done by Mr. Martin and other officers throughout the year allowed each child to purchase $150 in gifts for family members and themselves.

The officers who took the children shopping say the kids were buying for their brothers and sisters, before themselves. Missouri State Highway Patrol Sergeant Scott White tells Missourinet some of the children bought shoes for their siblings.

“The young man that I had today, the very first thing he picked up was for his one-year-old little brother. So that really shows you where the hearts of these kids are,” says White.

Organizers say the event ensures that children in need are able to have a memorable Christmas. Sergeant White says events like Operation T.O.Y.S. are why most officers became officers.

JCPD officer Martin also noticed the purchasing habits, noting most of the children bought presents for their brothers, sisters and parents.

“It’s about the gift of giving and that’s nice to see in a younger child that they know what that means,” Martin says.

A Missourinet reporter also saw some of the officers dig into their own pockets, to get extra items for the children. Sergeant White says it’s the officers’ pleasure to cover the difference. He says the officers do it with a grateful heart.

The children were also able to meet Santa Claus, elves and McGruff the crime dog.

Martin tells Missourinet he is appreciative to the numerous companies, individuals and fraternal organizations that donated. They include the Fraternal Order of Police Lodge #19, the Elks Lodge, Lions Clubs and Kiwanis.

Click here to listen to the full interview between Missourinet’s Brian Hauswirth and Jefferson City Police officer Les Martin, which was recorded on December 14, 2019 inside Jefferson City’s Walmart East:

Click here to listen to the full interview between Missourinet’s Brian Hauswirth and Missouri State Highway Patrol Sergeant Scott White, which was recorded on December 14, 2019 inside Jefferson City’s Walmart East: