You are here: Home / Archives for Clem Smith

House members who oppose the transfer legislation that has been sent to Governor Jay Nixon (D) say his office has indicated to them that he will call a special session for a new bill to be created. 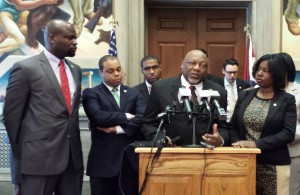 Representative Tommie Pierson (at podium) is joined by Representative Clem Smith (left) and other House Democrats who oppose the proposed transfer legislation.

The Chairman of the legislative black caucus, Representative Tommie Pierson (D-St. Louis City), urges Nixon to veto the bill that has been passed as soon as he receives it.

“Hopefully we can come closer to solving the problem if not solve the problem during a special session,” says Pierson.

Representative Velda Village Hills (D-Clem Smith) says the bill does nothing to help schools in danger of going bankrupt and shouldn’t be called a transfer bill. He says it is really about pushing school vouchers, and does so in largely black school districts.

He blames leadership in the House for pushing that issue and says a special session will reveal their motives.

“Is this truly about the education of these children in these districts? If the majority party fails to do something in [the special session], that answers the question right now,” says Smith.

Representative Chris Kelly (D-Columbia) says just because the same lawmakers would likely be dealing with the issue again does not mean a different result can not be expected.

A request for comment from Governor Nixon’s office is pending at the time this article is being published.

The state legislature has passed a bill meant to fix the state law that lets students transfer out of failing school districts. The proposal has been a priority for many lawmakers who say that law is bankrupting unaccredited school districts, particularly Normandy and Riverview Gardens in the St. Louis area. 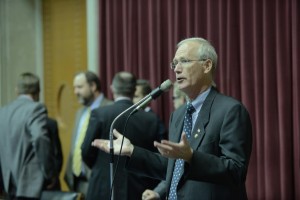 The bill contains a controversial “private option” for Jackson County, St. Louis and St. Louis County that could result in it being vetoed by Governor Jay Nixon (D). It would have the state accredit school buildings as well as districts. Students in an unaccredited school within an unaccredited district would first have the option to transfer to an accredited building in the same district. If no slots were available in those, one option would be for students to transfer to a nonreligious private school with local tax revenue from the sending district used to pay tuition.

Nixon has suggested he would veto any bill that includes any mechanism sending tax dollars to private schools, saying that is where he had to “draw a line.” The bill received a strong enough vote in the Senate to overturn a veto, but fell 20 votes short of that mark when the House passed it on Thursday. Neither chamber’s vote followed party lines.

See how House members voted on the legislation

Representative Clem Smith (D-Velda Village Hills) said he was the only lawmaker in either the House or the Senate who represents the Normandy School District, and he opposes the bill. He says it shouldn’t be called a transfer bill, joining other critics who said it was really an attempt to break the barrier keeping tax dollars from going to private schools.

“You’ve got kids in Normandy and Riverview that have been used to push vouchers,” said Smith. “And it’s a forced voucher, because you can vote it down in an unaccredited district but after three years it’s forced, it’s rammed down your throat … in my view, that’s all this bill is about.”

Some Republicans were also opposed to the private option. Representative Jeff Grisamore (R-Lee’s Summit) says he campaigned against using tax dollars in private schools when he first ran for the House, but said he was “torn” on how to vote on the bill.

Proponents argued that the private option was a small piece of the legislation and called the bill a compromise that would stave off disaster in failing schools. Representative Kevin Engler (R-Farmington) says opponents of the bill including Nixon don’t have a plan of their own that would pass the Senate.

Engler argued if the bill does not become law, school districts in danger of becoming bankrupt would have to be supplemented from state General Revenue.

“We’re going to have to put money in the budget that’s going to come from my school district to keep them alive,” says Engler. He says opponents of the bill including Nixon don’t have a plan of their own that would pass in the Senate.

Representative Vicki Englund (D-St. Louis) worked on the conference committee that came up with the final version of the bill. She urged Nixon to sign the bill but said whether he signs or vetoes it, he should act quickly.

“Get it over with, get it done, because then we need to call a special session to fix it,” said Englund. “Because if we are truly about solving these problems we need to come up here and do it.”

A House proposal that backers say protects workers’ paychecks has been sent to Gov. Jay Nixon.

The bill (SB 29) requires that a worker give permission once a year for a union to take dues out of his or her paycheck, or to use them for political purposes.

“I think that is important that [the union] yearly, at least, get the permission before they’re speaking on behalf of someone,” Burlison said.

Rep. Clem Smith (D-St. Louis County) says the bill is deceiving and wastes the time of the legislature in the final days of the session.

“This is an issue that does not exist,” Smith said. “People do it on their own will. They sign up on a form already to have additional money go to political action committees from labor unions and that money is spent to support labor activities. This deal about dues dollars … I need proof. We’re up here to be shown proof, no proof has been brought up.”

The legislation only applies to public employee unions and exempts first responders.