You are here: Home / Archives for Citizen’s Commission on Compensation for Elected Officials

A veteran state lawmaker from southeast Missouri will file a resolution this week, aimed at blocking proposed pay increases for state lawmakers and for statewide elected officials. 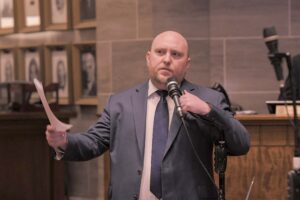 State Rep. Andrew McDaniel, R-Deering, was first elected to the Missouri House in 2014, and will be a senior member in January during his final House term in Jefferson City. He’s voted against previous pay raises for lawmakers, and says it’s state employees and teachers who should receive a raise.

“Until we can keep our promises to the state employees across-the-board and to the teachers and stuff, I don’t think any elected official deserves a pay raise. That’s pretty much the simple gist of it,” McDaniel says.

The bipartisan Citizen’s Commission on Compensation for Elected Officials is recommending a five percent pay raise for state lawmakers and for statewide elected officials. The “Springfield News-Leader” reports salaries for state lawmakers have remained the same since 2007, about $35,000 annually.

The proposed pay raises would take effect on February 1, unless the Legislature approves McDaniel’s resolution.

“When January comes around (for the 2021 legislative session), hopefully it gets referred to committee right out the door and we get it all done and hopefully it gets to the Senate and they concur with what I believe and what probably the rest of the Missourians believe,” says McDaniel.

Meantime, the Missouri Senate leader wants to see the details of the commission’s report, before he takes a position. Senate President Pro Tem Dave Schatz, R-Sullivan, emphasizes that the commission’s work is independent.

“What I do believe is what it was designed to do was to not make it a political issue, where legislators weren’t setting their pay,” Schatz says. “But this commission has been charged with trying to address that in a fair and reasonable manner.”

The last time the pay raise issue came up was in early 2017, and it was defeated by lawmakers.

Click here to listen to Brian Hauswirth’s full interview with State Rep. Andrew McDaniel, R-Deering, which was recorded on November 24, 2020: