You are here: Home / Archives for Christopher Bond

President Obama is asking Congress to let tax cuts put in place by the Bush administration expire, but only for those making $200,000 dollars or more or couples earning $250,000 or more.

Bond says the cuts need to stay in place across the board.

Bond says $200,000 is a threshold of earnings many small businesses claim, and if small business owners and farmers have to pay more taxes, they’ll hire fewer people. END_OF_DOCUMENT_TOKEN_TO_BE_REPLACED

President Obama’s top economic adviser has announced he will step down to mixed reaction by Missouri’s senators.

Senator McCaskill, a Democrat, sees no signs of a big shake-up with the decision of Lawrence Summers to step down as National Economic Council director in November to return to Harvard. She does see opportunity.

“But it does also give the president a chance to bring in some new voices and there’s nothing wrong with that,” McCaskill says. “Clearly, this has been a very difficult problem he inherited. He inherited an economy in free-fall. And while we’ve stopped the hemorrhaging and there are some really dim glimmers of sunshine on the horizon, there’s still obviously work to do.”

Three of the president’s top four economic advisers have decided to leave the White House. Summers served as Treasury secretary in the Clinton Administration. McCaskill points out that Summers initially agreed to join the Obama Administration for only one year to help the country dig out of the recession. He has stayed two, primarily to guide passage of an overhaul of the financial regulatory structure. Treasury Secretary Timothy Geithner is the last remaining economic adviser to arrive with Obama when he began his presidency in January of 2009.

Senator Bond, a Republican, is glad to see Summers go.

Bond hopes that President Obama seeks someone from the private sector to replace Summers.

“We don’t have anybody around the president who understands how the private sector works,” says Bond.

While disagreeing on the performance of Summers, Bond and McCaskill do agree that any new economic measures must concentrate on spurring the growth of small businesses. Congress has taken a step in that direction. It has passed the president’s small business incentive program, which provides easier credit and $12 billion in tax cuts for small businesses. The bill also creates a $30 billion fund to help small banks left out by the 2008 financial rescue package. 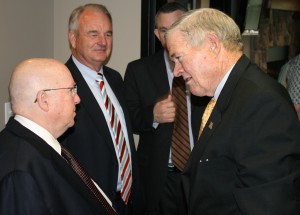 Senator Bond has seen a lot in his 40 years in politics, but finds himself watching from the sidelines as the battle rages to replace him.

Bond has seen the negative ads in the United States Senate race in Missouri.

“Politics is always rough and tumble, I’m used to that,” Bond tells the Missourinet. END_OF_DOCUMENT_TOKEN_TO_BE_REPLACED 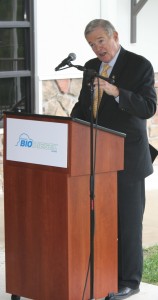 Sen. Bond speaks at the National Biodiesel Board in Jefferson City

Senator Bond reflected on a lifetime of public service upon receiving a Lifetime Achievement Award from the National Biodiesel Board.

The board honored Bond at its Jefferson City headquarters, presenting him with the award and planting a chestnut tree in his honor. Bond grows chestnut trees on his land in Mexico, Missouri.

Bond told the audience that he viewed his job in Washington as one that secured federal funding for good local ideas in which local leaders were willing to invest. He said that it was important to bring Missouri ideas to Washington rather than the other way around. END_OF_DOCUMENT_TOKEN_TO_BE_REPLACED

It appears President Obama’s strategy for winning the war in Afghanistan is winning over key members of Missouri’s Congressional delegation.

“I thought the West Point speech was excellent,” Skelton tells the Missourinet. “The most important part was calling for America to unify against the common enemy.” END_OF_DOCUMENT_TOKEN_TO_BE_REPLACED

Senator Bond has resigned from a special panel formed to review CIA detention and interrogation policies.

Bond quit in response to conflicts with the Obama Administration. Bond says the decision by Attorney General Eric Holder to investigate the interrogation practices of the CIA during the Bush Administration interferes with the work of members from the Senate Intelligence Committee to review interrogation policies and suggest changes.

Bond is vice chairman of the Senate Intelligence Committee. Holder has appointed a federal prosecutor to review the legality of CIA interrogation techniques used during the Bush Administration. Bond says CIA officials will refuse to be candid with the panel, because of worries their testimony could be used in federal prosecutions.

Bond takes to the Senate floor to tell colleagues they must focus on the military mission in Afghanistan, not the political positions being staked out in Washington.

"Let’s ignore the politics of the moment and finish the job in Afghanistan," Bond says during his speech on the floor.

Bond, Vice Chairman of the Senate Intelligence Committee , urges President Obama to stick to the commitment he outlined in March when the president proclaimed his commitment to winning in Afghanistan.

"Amid the reports of wavering and hand-wringing an important question comes into mind, ‘What’s changed?’" Bond says, "During the campaign and after his inauguration the president has spoken repeatedly about the importance of winning the war in Afghanistan."

Bond says he is disturbed by news reports indicating the president will not comply with General Stanley McChrystal’s request for more troops in Afghanistan. Bond suggests that McChrystal be summoned to Washington to speak directly to Congress about what he believes the military needs to win in Afghanistan.

Bond says this is no time to waver.

"Let’s not snatch defeat from the jaws of victory in Afghanistan just because a few pundits are peddling political pessimism in Washington," Bond says.

Bond expresses concern about the president’s most recent remarks reported in the news media, saying it seems to indicate the Obama Administration is inclined to reject the counter-insurgency strategy recommended by McChrystal and backed by other military brass. One report indicates the Defense Secretary Gates will delay sending McChrystal’s troop request to the White House, because the president isn’t ready to consider it. All the experts, says Bond, agree that the military effort in Afghanistan needs proper resources, including additional troops, to mount a proper counter-insurgency strategy.

Senator Christopher "Kit" Bond (R-MO) has taken to the floor of the U.S. Senate to mark the eighth anniversary of the September 11th, 2001 terrorist attacks by remembering those who died and to call for continued pressure to be put on terrorists by completing the military mission in Afghanistan.

"Today, as we reflect on the anniversary of 9/11 and the lives lost that day, we can honor the victims and their families by finishing the job in Afghanistan and defeating the terrorists who are bent on death and destruction," said during a Senate floor speech.

Bond says defeating the militants in Afghanistan is a job that must be done.

"The stakes of turning out back on this conflict could not be higher," said Bond. "America ignored the fact that Afghanistan became one giant training camp for terrorists in the ’90s and thousands of Americans died on 9/11 as a result."

Bond says leaving Afghanistan would be the equivalent of declaring defeat.

"Declaring defeat in Afghanistan today would signal to the families of those who died on September 11th and the troops that have fought since then in service to our country that their loved ones died in vain."

Bond says violent extremists must not be allowed to think they can wait out the military and economic might of the international community.

The death of former Governor Warren Hearnes, who died Sunday night at the age of 86, has brought statements and kind thoughts from many of Missouri’s political leaders, including the man who succeeded Hearnes in the Governor’s Office – now-U.S. Senator Christopher "Kit" Bond.

In a statement, Bond expressed sadness on the death of Hearnes, praising him as someone who dedicated his life to public service.

A few days before Hearnes’ death, when it was known the former Governor was gravely ill, Bond spoke to reporters at the Missouri State Fair in Sedalia, talking about the true spirit of bipartisanship exhibited by Hearnes.

"Nobody could have been a better friend," said Bond. "You talk about working in a bipartisan way. Warren Hearnes showed me how to do that. He was a true leader. A great spirit of bipartisanship came from his efforts."

Bond, a Republican, had campaigned hard against the policies of Hearnes, a Democrat. But when Bond won election to the Governor’s Office, Hearnes could not have been more helpful.

"He stepped forward and made a transition as smooth as it could be for a real greenhorn like me to take over," said Bond.

Funeral arrangements have been finalized. Hearnes’ body will lie in State in the Capitol Rotunda for public visitation from 10 am to 2 pm on Wednesday, followed by a State Funeral in the Rotunda. Following the services Hearnes’ body will be taken to his hometown of Charleston, in southeast Missouri, for a visitation from 5 pm to 8 pm on Thursday, with a Charleston funeral service scheduled for Friday morning at 11 o’clock at the First Baptist Church.

Missouri’s senior U.S. Senator is among a small group of Republican Senators announcing the decision to vote in favor of the confirmation of Judge Sonia Sotomayor for a seat on the U.S. Supreme Court. Senator Christopher "Kit" Bond says that while he respects his fellow Republicans who oppose the nomination, he hopes his vote bodes well for a future with less polarization and less confrontation.

Bond told the Senate he wants to see a time when Senators put politics aside – something he says then-Senator Barack Obama refused to do when he voted against President George W. Bush’s nominees.

"I could not forget that time as, regrettably, President Obama did when he was in the Senate," said Bond. "I could easily say, as Senator Obama said, that I disagree with a nominee’s judicial approach and that allows me to oppose the nominee of a different party. Luckily for President Obama I do not agree with Senator Obama. I reject the Obama approach to nominees."

Bond says it’s time to put politics aside when it comes to judicial nominees.

"From our liberal friends, I hope they remember this day when another qualified nominee is before the Senate who is conservative," said Bond. "The standard set by Senator Obama should not govern the Senate."

Bond then expressed his satisfaction that the Senate has reviewed the Sotomayor nomination, with no significant findings against her, and urged his colleagues to follow him in voting to confirm her.