You are here: Home / Archives for China

There have been efforts to sue and admonish China for its role in the coronavirus spread worldwide. American leaders say China hid the growing virus threat, which began in Wuhan Province in late 2019.

The congresswoman from the St. Louis region, Ann Wagner, says she is taking an approach that is more realistic — in a bill that she filed last week to take away Chinese-owned assets in America.

Wagner is the vice ranking member of the House Foreign Affairs Committee. Her legal staff has been working for months with experts and international lawyers to develop the bill.

“I think it’s a little more realistic in terms of actually getting justice and compensation for Americans because what the Chinese did to mislead and lie to the international community and the harm that is has caused both from a health and an economic standpoint is beyond egregious,” she told Missourinet.

“These reckless acts directly contributed to the deadly pandemic that has killed nearly 100,000 Americans and unleashed an economic tragedy that has impacted communities in every corner of the United States. It is not enough to just publicly rebuke the Chinese Communist Party, they must pay for the loss of life and economic injury they caused.”

The proposed Compensation for Americans Act directs the president to employ a series of measures including creating a public repository of Chinese assets and holdings in the United States, imposing travel restrictions on government officials and medical equipment suppliers, and removing China from its status in the United Nations and World Bank.  Read the summary.

The legislation instructs President Trump to seek a bilateral agreement on with China on compensation to America.

Missouri’s junior senator is demanding answers from the U.S. Food and Drug Administration (FDA) about the coronavirus and its potential impact on drug and medical devices.

Hawley tells Missourinet that his “Medical Supply Chain Security Act” is aimed at ensuring that Americans have uninterrupted access to life-saving drugs and medical devices. He says the coronavirus outbreak in China highlights severe weaknesses in our medical supply chain.

“And in the long run, we need to not only secure that supply chain, we’ve got to bring it back,” says Hawley. “We need it back here in the United States, and this bill would be a step forward.”

Senator Hawley has written a letter to the FDA, saying the degree to which some American manufacturers rely on China to produce life-saving medications is inexcusable.

Hawley says the outbreak has threatened the domestic supply of about 150 prescription drugs, some of which don’t have alternatives on the market. He wants FDA Commissioner Dr. Stephen Hahn to testify.

President Donald Trump declared a public health emergency for the coronavirus, and Congress this week approved $8.3 billion in emergency funding to assist both federal and state governments with the disease. About $4 billion of that funding will go toward making diagnostic tests more broadly available.

Hawley’s colleague, U.S. Sen. Roy Blunt (R), will be at the Jordan Valley Health Center in Springfield on Friday morning to update reporters about the congressional funding package.

Click here to listen to the full five-minute interview between Missourinet’s Brian Hauswirth and U.S. Sen. Josh Hawley (R), which was recorded on March 4, 2020: 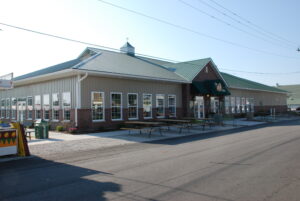 In the latest volley in the U.S. vs. China trade war, China retaliated Friday morning with higher export charges on American goods and agricultural products. Then Trump responded in a tweet late Friday afternoon: “China should not have put new Tariffs on 75 BILLION DOLLARS of United States product (politically motivated!) Starting on October 1st, the 250 BILLION DOLLARS of goods and products from China, currently being taxed at 25%, will be taxed at 30%…”

Missouri’s 7th District Congressman Billy Long, a Trump ally, reacted to the news in Springfield today, “I think it’s time to bring this tariff thing to a conclusion. I’ve been giving the president benefit of the doubt on this, the farmers have too,” he told Brownfield Ag News.

Long was in his district with U.S. House Agriculture Chairman Collin Peterson, D-MN, as part of a two-day trip to Missouri to meet with members of Congress and their farm constituents. Peterson also met with Rep. Vicky Hartzler, R-4th, and Rep. Emmanuel Cleaver, D-5th. 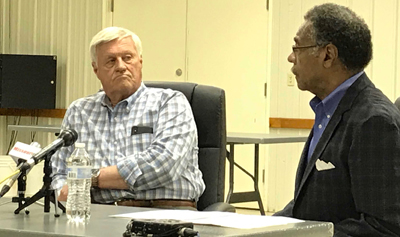 Peterson and Cleaver met with local farmers in a community center in Odessa Thursday to talk about rural broadband needs, federal disaster payments — and the trade war.

“There are people that will win in the China deal; their just not us. It’s the intellectual property, some of these other areas, autos, they’re the ones that will win if we ever get a resolution of the Chinese situation. Agriculture–I don’t see any upside for us,” Peterson told about 50 farmers.

Peterson, a career farmer, says his district has been hit hard in pork and soybeans.

“As of now, they are able to buy all the pork they need from the Netherlands, and from Brazil and other places and they haven’t had to buy from us. Our guys are dying on the vine. The soybean sales have dried up not only because of tariffs but because the market’s dried up in Asia,” he said.

He says trade issues with China could have been dealt with before that country became a member of the World Trade Organization. Peterson says he voted against that. Now he says, he would handle the situation by taking China to the WTO court.

“You’re going to get more good out of that than you are out of these tariffs, ” he told Brownfield Friday in Springfield.

The coalition members are former state, national, business, military, and diplomatic leaders who continue to build partnerships across the world. Holden, from the tiny town of Birch Tree, Missouri works to create international relationships at the local level: city-to-city, business to business.

“It’s global in nature, it’s bipartisan in nature,” he says.

This week, Holden and more than 300 current and former elected officials lobbied Congress to protect funding for the State Department and U.S. Agency for International Development, which the Administration has proposed cutting by 24 percent. Holden says State Department and foreign aid spending make up one percent of the federal budget.

Holden says that this funding for international development hits home.

“For Missouri, 85-percent of the money that is going through foreign aid involves small businesses. It is over 700,000 jobs within our own state that are benefitted by this,” he told Missourinet.

Holden says the point of building global relationships is building a competitive edge for the U.S.

“Ninety-five percent of the consumers in this world live outside the United States. If we want our business to be successful, we can’t allow other countries and other businesses in other countries to be the only ones selling the products.”

Tariffs or the threat of tariffs make it harder to grow markets, Holden says.

“We want to make sure we are treated fairly, but at the same time, putting up the actions that I see coming out of the government today on increasing tariffs on products I don’t think is in our own self-interest.”

He says even the tense relations with China calls for diplomacy. Listen to that part of Holden’s interview with Missourinet’s Ashley Byrd.