You are here: Home / Archives for Cedar County 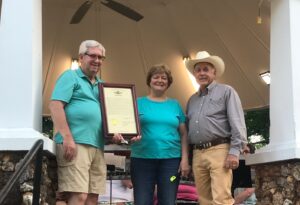 State Rep. Warren Love, R-Osceola, presented the resolution to the band earlier this month, noting they’re also one of the oldest municipal bands west of the Mississippi River.

“It’s unbelievable that a small town like El Dorado has that much talent and they said they’re 135 years old,” Love says. “But they play every weekend, during the summer months, there in that beautiful (city) park.”

El Dorado Springs, which is in Cedar County, has about 3,500 residents. It is located near Highway 54. The town Chamber of Commerce website notes the band plays during the summer months on Friday and Saturday nights at 8 and on Sunday afternoons at 2.

“The night I presented the resolution, I would estimate there were at least 40 members in the band that was all seated in the bandstand,” says Love.

Representative Love says the band plays many historic songs. His district includes Cedar County. The House resolution describes the band as a symbol of the town itself and “the treasured crown jewel of the of the El Dorado Springs community.”

The Chamber website notes there was a large celebration in the park, at the end of World War I in 1918. The band performed a concert on Main Street, and the band’s drum corps marched up and down city streets. The website says church bells were ringing during the celebration, and that there were also shotgun blasts until the town’s hardware stores ran out of ammunition.