You are here: Home / Archives for Carl Edwards 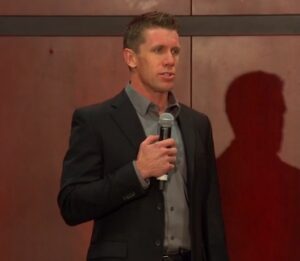 Carl Edwards addresses the media at Joe Gibb Racing Headquarters to announce he’s not racing in 2017.

Columbia native Carl Edwards made it official on Wednesday from Joe Gibbs Racing headquarters that he will not race in NASCAR in 2017.

“I’m stepping away from full-time driving in the Cup Series. I don’t have any intention of going back to full-time racing.”

Edwards said there were three reasons for leaving:

1. Despite not winning a NASCAR championship, he’s satisfied with his career.
2. He wants to devote time to the people in his life. Carl said not only is racing a full-time job, but he thinks about racing 24 hours a day…he said he even dreams about it.
3. He wants to stay healthy. He knows there are inherited dangers with racing, but he’s come away healthy and he wants to do what his gut is telling him.

Edwards is not sure what he wants to do at this point. He is not entertaining any other offers at this time. He said that he doesn’t want to say the “R” word when it comes to racing, but he’d be open to working with Joe Gibbs in the future.

Edwards says he’s enjoyed broadcasting, something he would consider. Also thinks he and Joe Gibbs could do some interesting things together

END_OF_DOCUMENT_TOKEN_TO_BE_REPLACED

FOXSports.com is reporting that Carl Edwards will step away from Joe Gibbs Racing and will not compete in the 2017 NASCAR season.

According to the website’s sources, Edwards will pursue outside interests.  A press conference is expected on Wednesday by JGR to announce Daniel Suarez as Edwards’ replacement.

While Fox Sports reported specifically the 2017 season, ESPN is saying that Edwards will officially retire.

The 37 year old Columbia, Missouri native has 28 victories, 124 top five finishes and 220 top ten finishes in 445 starts.  Edwards has had a few championship close calls.  In 2011, he and Tony Stewart tied for the championship, but Stewart won on a tiebreaker. In 2008, Edwards finished in second to Jimmy Johnson.  Last season, he crashed on a restart with ten laps to go at Miami as he was contending for a championship. 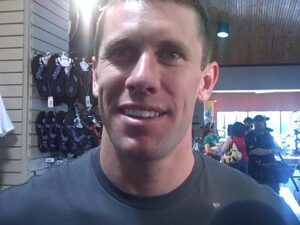 The 35 year old Edwards has 23 Sprint Cup wins in 360 career starts, all with Roush Fenway Racing. RFR announced earlier this season that Edwards would not return.  In 11 seasons, Edwards has finished in the top-five in points four times, including runner-up finishes in 2008 and 2011.  Edwards won the Nationwide Series title in 2007. He also has six career Camping World Truck Series victories.

Edwards will drive the #19 car. 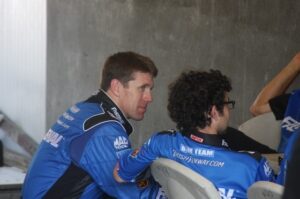 Carl Edwards sits in the garage area after qualifying in the Brickyard 400. (photo/Rick Gevers)

Columbia NASCAR driver Carl Edwards will be moving to a different team next year–but he’s not saying which one.  He is however saying it’s on his own terms.

Edwards has won 23 top-level races for Roush-Fenway Racing, but team co-owner Jack Roush did not list him as one of his drivers for next year. Team officials said Edwards had told them more than a month ago that he was negotiating with another team.

Edwards refused to discuss contract negotiations with Missourinet’s Bob Priddy, who was in Indianapolis, covering the race. Rumors have already been circulating for a few weeks about him going to the Joe Gibbs Racing operation, which is preparing a fourth car for next year.

Roush says he wishes the move would not happen, but he says Edwards is curious about what another team would be like. “I think Carl wanted to try something different before he saw his career get in its middle term and its final years,” he said.

Edwards has been with Roush throughout his NASCAR career, beginning in the trucks series, moving up to the present Nationwide Series where he was the national champion in 2007. All Edwards would say is that the deal for next year, but this is not the time to announce it.

If Edwards does move to Gibbs, he’ll become a Toyota driver. He has been a prominent face for Ford both nationally and in the Columbia area. It’s thought that Ford played a key role in his decision to stay with Roush three years ago.

Joe Gibbs Racing was founded by former NFL coach Joe Gibbs, who led the Washington Redskins to four Super Bowls, winning three. The team presently is made up of Denny Hamlin, Kyle Busch, and Matt Kenseth, who was an Edwards teammate at Roush.
JGR has won NASCAR’s top championship three times with Bobby Labonte (2000), and with Tony Stewart (2002, 2005).

Columbia native Carl Edwards vowed he would dominate at Phoenix and he was right. Leading the final 78 laps, Edwards pulled away on a late restart and ended his 70-race winless streak on Sunday at Phoenix.

“This win feels as good or better as any win I’ve ever had,” Edwards said.

That’s understandable following a rough 2012 season where Edwards missed the Chase. He won for the first time since Las Vegas in 2011.

“Last year we didn’t even make the Chase,” Edwards said. “For me to sit home while everybody was at the Chase stuff and in Vegas, that was a little bit of a shock to me and I did not like that at all. To get a victory puts us in better position to be in the Chase, it just feels good to win and I’m just very glad to be here.”

Edwards got a nice push from his one-time bitter rival Brad Kesolowski.  Edwards talks about how and why those two have pushed that bitterness to the side.  Highlights of  Edwards’ press conference from NASCAR.com

Still looking for his first win in the Sprint Cup Series since week three of last season, the odds of Carl Edwards competiting for a championship this season are slimmer than his loss to Tony Stewart last year at Homestead. It will take nothing short of a miracle for the Columbia, Mo. native to get in as a wild card.

After Sunday’s 36th-place finish at Atlanta, Edwards is all but mathematically eliminated from Chase contention. He is 49 points behind Stewart, who finished 22nd and can do no worse than a wild-card spot in the Chase because of his three victories.  The only way Edwards is going to get into the Chase is with a win at Richmond, then to make up 26 points on Kyle Busch, currently two places ahead of him in the standings, and also leapfrog Jeff Gordon in points.

Check out video from NASCAR.com of Edward’s bad day in Atlanta.

Bob Osborne, Carl Edwards’ crew chief for his Sprint Cup debut in 2004, stepped down from his role at Roush-Fenway Racing due to health concerns. Chad Norris was named the crew chief for the No. 99 team. Osborne and Edwards combined for 18 wins and two runner-up finishes.

“I have had the pleasure of working with Carl Edwards for the past nine years and, during that time, my focus has been building a championship-caliber program,” Osborne said. “I’m proud of the 18 wins we’ve had together in Sprint Cup Series competition and our two second-place points finishes. At this time in my life, however, concerns with my health have necessitated that I change my role within the organization. This transition is not an easy one, but I’m thankful to have the full support of Jack, Carl and the entire organization. I also have every confidence in Chad Norris, and I look forward to working with him as we continue to pursue a championship in 2012. I also appreciate the privacy and respect that the community will give me and my family during this difficult time.”

Edwards said he was grateful for what Osborne did for him as a driver. “I cannot say enough good things about Bob Osborne,” Edwards said. “He is without a doubt one of the smartest guys in the sport. I’m also appreciative of the fact that he’ll continue to be a resource for me and our team as we focus on these final races.”

Osborne will stay on with Roush-Fenway as a senior member of the organization’s management team and steering committee.

Under Daytona’s unique qualifying format, only the two fastest drivers in time trials know they’ll be starting next Sunday on the front row. The rest of the drivers will battle for positions Thursday’s dual 150 qualifying races.

END_OF_DOCUMENT_TOKEN_TO_BE_REPLACED

Columbia native Carl Edwards led the most laps at Miami-Homestead, 119 of the 267, but he wasn’t leading when it mattered most. Trailing Tony Stewart by one second for the final 40 laps, Edwards was unable to catch Stewart who won the race and tie-breaker giving him the 2011 Sprint Cup Championship.

END_OF_DOCUMENT_TOKEN_TO_BE_REPLACED

Columbia native Carl Edwards is leading Tony Stewart by three points heading into next weekend’s NASCAR Sprint Cup finale at Homestead after finishing in second behind Kasey Kahne in Phoenix.

Stewart finished third and at one point was leading the race and had a two point lead over Edwards for the overall standings. Edwards finishes the day with 2,359 points total.

Edwards is looking for his first Sprint Cup Championship. It will also end Jimmie Johnson’s reign of five straight championships.