You are here: Home / Archives for Cardinals

Mike Leake has won just once in his last ten starts and last night’s outing went two innings, his shortest since 2013 when he couldn’t finish the second inning…that too was a start against the Mets.  Wednesday night,  Leake was charged with four runs, but left after being down 7-0.  Cardinals lost to the Mets 7-3.

The Mets sent eight batters to the plate in the first inning and put together three straight RBI hits with two outs, including a double from Lucas Duda who is now 7-for-9 in his career against Leake.

Leake on being owned by that Duda.

The Mets added four more runs off of Leake in the second, only one of them earned. Third baseman Jedd Gyorko’s throw sailed into right field on what could have been a double-play grounder, but by that time the game was out of hand.

St. Louis battled back and made things interesting in the 8th, scoring twice and even led to a save opportunity for a “leaky” Mets bullpen, but the Cardinals were cooled off and fell into fourth place in the Central.

The Pirates beat the Brewers in 10 innings to leap frog the Cards for third.  St. Louis plays the Mets starting at 11:10 our time on Thursday and then head to Chicago to face the Cubs who have won six straight to pull to within 1 ½ games of Milwaukee. 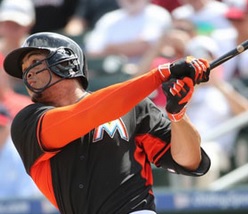 Carlos Martinez was dominant in two perfect innings, and Matt Adams delivered a two-run single in the first to lead the Cardinals to a 4-1 win over the Marlins on Thursday at Roger Dean Stadium in Jupiter, FL.  Martinez threw 29 pitches, with 22 for strikes, while striking out three.

Miami’s Giancarlo Stanton played four innings in right field, and in two at-bats, flew out twice.  It was the two-time All-Star’s first game since he was struck in the face by a pitch at Milwaukee on Sept. 11.  He was also wearing his protective face mask.

Marco Gonzales will get his first opportunity to audition for a rotation job on Friday when he starts against the visiting Astros at Roger Dean Stadium.

The Cardinals had runners on first and third with none out in the ninth inning but came up empty handed and lost Sunday afternoon 3-2 to the Milwaukee Brewers at Busch Stadium.

Brewers’ closer John Axford walked Matt Holliday to start the ninth and pinch runner Tyler Greene went to third on a single by Carlos Beltran before Axford struck out David Freese. Then the Cardinals tried to steal a run when Yadier Molina struck out on a high delivery, with Beltran breaking for second and Greene ready to head home if there was a throw.

When catcher Jonathan Lucroy double-pumped on his throw to second it threw off Greene’s timing. Beltran, meanwhile, stopped early because he thought he’d be a certain out, leaving Greene an easy out on a relay from shortstop Alex Gonzalez.

The Cardinals were up 1-0 when the Brewers got to Jaime Garcia for three runs in the sixth. Aramis Ramirez had an RBI single to tie it and Lucroy, hit a two-run double with a drive off the left-field wall.

It was the first time the Cardinals sweep a four game road series since 2004, but despite the 8-4 win on Sunday, the Cardinals are exactly in the same spot they were after Thursday’s win…three games behind first place Milwaukee.

While the Cardinals beat up on the Marlins, the Brewers were beating up on Houston. Milwaukee has won 11 of their last 12 as the two teams prepare for another show down starting on Tuesday at Busch Stadium.

This weekend, Albert Pujols, Matt Holliday and Lance Berkman tore up Florida pitching, hitting a combined.438 (21 for 48) in the series with five home runs and 13 RBIs. It was the final game in the Marlins’ current home for the Cardinals, and their record in the stadium is 45-27, best in the NL. 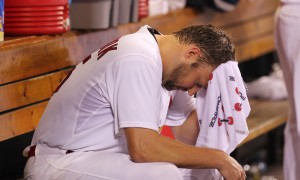 Cardinals starting pitcher Jake Westbrook retired the first 16 Chicago Cub batters he faced, but then unraveled by giving up four runs in the 6th inning as the Cardinals lost 6-3 Sunday night at Busch Stadium.

END_OF_DOCUMENT_TOKEN_TO_BE_REPLACED 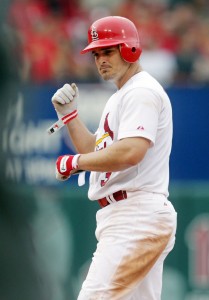 St. Louis Cardinals Ryan Theriot pumps his fist from second base after hitting a double in the seventh inning against the Chicago Cubs at Busch Stadium in St. Louis on July 30, 2011. Theriot had four hits and three RBIs as St. Louis defeated Chicago 13-5. UPI/Bill Greenblatt

Former Cub Ryan Theriot broke a 2-for-38 slump with two hits on Friday, then continued to torture his former team wiht four hits and three RBIs on Saturday to help the Cardinals shake off a five-run deficit and turn it in a 13-5 win.

Theriot is 6 for 7 with six RBIs against his former team in two games and is hitting .571 against the Cubs. Albert Pujols and David Freese each homered for the Cardinals. It was the 432nd homer of Pujols’ career and came one day after he reached 2,000 hits. The home run puts him in 40th place on the career list.

END_OF_DOCUMENT_TOKEN_TO_BE_REPLACED

Mets outfielder Angel Pagan hit the first pitch he saw from Cardinals closer Fernando Salas out of the park giving the Mets a 6-5 win in 10 innings over the Cardinals, who have now lost four of their last five since the break.

END_OF_DOCUMENT_TOKEN_TO_BE_REPLACED

Former Royal Carlos Beltran reached base five times with two doubles, a single and two walks. Angel Pagan and Daniel Murphy hit two-run doubles and the National League’s leading hitter was back in the Mets’ lineup as the Cardinals dropped their series opener 4-2 at Citi Field in New York.

END_OF_DOCUMENT_TOKEN_TO_BE_REPLACED

Zack Cozart hit his first major league homer on Sunday, and the Cincinnati Reds used two wild pitches by Jaime Garcia to rally for a 3-1 victory over the St. Louis Cardinals.

Garcia (9-4), was 5-0 in his career against the defending NL Central teams. Ryan Hanigan singled home the tiebreaking run an inning later, and Cozart homered in the eighth.

The St. Louis Cardinals and left handed pitcher Jaime Garcia finalized a four-year contract extension on Wednesday, with a pair of club options that could run the agreement through the 2017 season. Multiple reports say the total guaranteed value of the contract is at $27.5 million.

Garcia was one of those diamond in the rough type of picks. He was taken in the 22nd round and missed a year with arm injuries, yet has proven to be a very reliable #2 starter in the absence of Adam Wainwright.

Last season Garcia was a surprise finishing third in NL Rookie of the Year voting. This year he is 9-3 with a 3.22 ERA and is dominating at home with a 6-1 record and an ERA under two.