You are here: Home / Archives for businesses

Missouri’s House Speaker anticipates that the governor will expand his special session call to include COVID-19 liability. 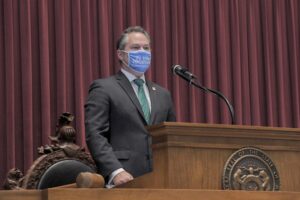 Speaker Elijah Haahr, R-Springfield, made his comments to Missourinet, during a Tuesday afternoon interview in his Capitol office in Jefferson City. He expects the Missouri House to be in session in December to work on COVID liability.

“We’ve been in long talks with the (Capitol’s) second floor (the governor’s office) on that for several weeks now and those talks have gotten pretty serious, and I think we’re at a place where we’re comfortable moving forward,” Speaker Haahr says.

The Missouri Chamber of Commerce and Industry is also urging the governor to include COVID liability in his special session call, saying January is too long to wait to shield businesses, schools and hospitals that follow public health guidelines from COVID suits.

“There’s a lot of employers out there that are a little bit concerned about opening for fear of being sued on frivolous grounds for COVID, by customers, by employees, that sort of thing,” says Mehan.

Mehan says more than 800 Missouri employers, mostly small businesses, have signed a letter requesting it. He says that includes a skate park and a pizzeria.

“We’ve seen six of the eight contiguous states, the border states, adopt something in this light. Most recently Iowa signed it into law,” Mehan says.

As for Governor Parson, he supports the COVID-19 liability proposal and has publicly stated at several Capitol press conferences that he would include it during the special session, if there’s a path for it to pass.

House Majority Floor Leader Rob Vescovo, R-Arnold, who will be Speaker in January, has also written a letter to the governor, asking him to expand the special session call.

“Right now there are numerous small businesses afraid to open because of the threat of litigation tied to COVID-19,” Leader Vescovo writes. “Additionally, many of our hospitals and health care professionals are asking us to help them to better be able to do their jobs by passing commonsense COVID-19 liability protections.”

Speaker Haahr tells Missourinet that many businesses across the state have reached out, adding that lawmakers are working to keep the language tight.

Click here to listen to Brian Hauswirth’s full interview with Missouri Chamber of Commerce and Industry President Dan Mehan, which was recorded on November 6, 2020: