You are here: Home / Archives for Buck O’Neil Bridge

Missouri’s governor proposed about $1 million in funding for witness protection during Wednesday’s State of the State Address in Jefferson City, in an effort to battle increasing violence in urban cities. 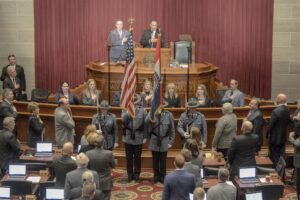 “I hear law enforcement say that very thing that there are people that they know that know who these individuals are that are committing these crimes but they’re scared to death to come forward because they don’t want to be the next victim,” Basye says.

Basye’s district includes Columbia, which had 12 shooting deaths in 2019. Columbia Mayor Brian Treece and Police Chief Geoff Jones were special guests of Governor Parson at the State of the State Address.

Meantime, the governor received a standing ovation during his State of the State, when he announced that a new bridge will be built to replace the deteriorating Buck O’Neil Bridge in Kansas City. The bridge, which was built in 1956, crosses the Missouri River.

“It’s a major, not just for the city of Kansas City but the entire region,” says Razer. “That’s a huge regional priority, it’s something that has to be done.”

About 44,000 vehicles use the bridge daily. Missouri Department of Transportation (MoDOT) Director Patrick McKenna tells Missourinet that federal, state and local funding will pay for the $200 million project. McKenna expects construction of the new bridge to begin in about two years.

Governor Parson also praises economic progress happening in Kansas City, noting it beat more than 130 cities around the nation to land two major divisions in the United States Department of Agriculture (USDA), bringing more than 500 new jobs to the region.

Representative Razer praises the bipartisan and bi-state cooperation between Missouri and Kansas that took place, noting the jobs will pay about $100,000 annually.

USDA is relocating its Economic Research Service (ERS) and its National Institute of Food and Agriculture Policy (NIFA) agencies to Pennsylvania Avenue in Kansas City.

Click here to listen to the second part of the interview: