You are here: Home / Archives for bonds

The head of the Department of Mental Health’s Behavioral Health Division is optimistic about the Governor’s proposal that could accelerate the replacement of the only maximum security psychiatric unit in the state. 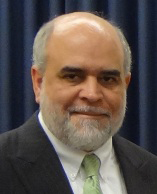 Director of the Division of Behavioral Health at the Missouri Department of Mental Health, Mark Stringer.

Governor Jay Nixon announced last week his proposal to use roughly $200-million in appropriation bonds to pay for construction of a replacement for Fulton State Hospital.

Mark Stringer has said it has been his “dream” to see that facility, with buildings dating to 1937, be replaced with something more modern that would be safer for patients and staff.

He says Fulton is the last stop for the patients thought to pose the greatest potential for harming themselves or others.

“Having worked in a psychiatric hospital years ago where a very senior nurse was killed, and the patient that killed her was sent to Fulton State Hospital and remains here today.”

Stringer says the hospital is one of the most dangerous places to work in the state, and he attributes that to its design. Long corridors mean longer times for staff to arrive when problems occur and create echoes that can agitate patients, while the design also leaves poor lines of sight for staff to see what’s happening around them.

Replacing it is the best option to improve safety, says Stringer, and he says that’s been proven elsewhere, “In other parts of the state where we have either built new psychiatric hospitals or modernized, we’ve seen just that. We’ve seen it here in Missouri, we’ve also seen it in other states where they’ve built new psychiatric hospitals … we see both patient injuries go down and staff injuries go down.”

No plan yet, but a general concept

A plan for the new hospital has not been created. One had been put together years ago and state mental health officials used it as a baseline in coming up with an estimate of $211-million dollars for construction of a new facility, accounting for changes that have been made to lower the number of patients at the Fulton hospital since that plan had been drawn up.

A supplemental budget bill signed by the Governor included $13-million dollars to pay for a new design. Governor Nixon had withheld all but $2-million of that, but announced last week he has released the remaining $11-million so that planning can proceed.

Stringer says the basic idea for the new facility is known.

Stringer understands the whole project would take between 5 and 6 years from design to completion.

The Governor’s plan must go through the legislative process. At least one state lawmaker, Representative Chris Kelly (D-Columbia) opposes it, saying the use of appropriation bonds is unconstitutional because they don’t require voter approval.

Nixon argues they have been used for other state projects in the past, and Stringer says that’s a valid argument.

“There’s certainly historic precedent for it, and so I believe it’s entirely appropriate.”

A House budget subcommittee has passed a proposal to have the state issue $1.2 billion in general obligation bonds to pay for projects at colleges and universities, state parks and buildings and other infrastructure needs. 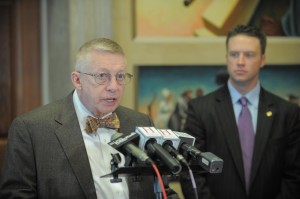 Representatives Chris Kelly (foreground) and Lincoln Hough are the chairman and co-chairman of the House Appropriations Committee on Infrastructure and Job Creation.

The measure next goes to the full House Budget Committee. If it clears the legislature it would require voter approval.

The Committee has not yet debated a list of projects that could receive proceeds from the bond issuance. A resolution has been drawn up containing that list, but it will not be discussed until lawmakers return from next week’s Spring Break.

See the proposed resolution with the list of projects the bond proceeds could support.

Kelly acknowledges the state has used revenue bonds for non-revenue bearing projects before, and he knows there are lawyers that disagree with his assessment.

“I think these are the same lawyers who would say, ‘You may bond on the premise that you can mine green cheese on the Moon and sell it. So, I do not give much credibility to lawyers who say the State of Missouri can issue revenue bonds for non-revenue projects. Including the Governor.”

The proposal was amended to add a revolving fund of between $40 million and $60 million dollars for public schools to tap into for maintenance projects, and to require a cost-share from colleges and universities.

It also would create a “Taxpayer Protection Commission” of five members appointed by the Governor, the Senate President Pro-Tem and the Speaker of the House, to oversee management of the bond proceeds.

The House Appropriations Committee on Infrastructure and Job Creation on Tuesday will consider the first in-writing list of projects that could be covered by a proposed bond issuance. 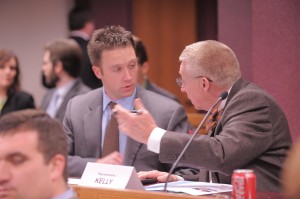 A resolution will be offered by its co-chairman, Representative Lincoln Hough (R-Springfield). The list includes targets that have been discussed by proponents of the measure and in committee hearings, including Fulton State Mental Hospital, sewer, building and road projects at Missouri State Parks, rural water projects, major metropolitan economic development projects and the State Capitol and various projects at 26 colleges and universities.

View the proposed resolution, with its list of projects.

The Committee could also vote Tuesday on what dollar amount its bonding proposal will be. It was introduced in the House at $950 million dollars. Its chairman, Representative Chris Kelly (D-Columbia) says Tuesday’s discussion will begin at $1.2 billion. The Senate Appropriations Committee has voted out a $950 million proposal.

Kelly says the legislature will act on two pieces. One would be the resolution with a list of projects that the state will follow, in the words of the draft resolution, “to the degree possible.” The other would be a resolution that would ask voters to authorize the bond issuance.

The man who was governor the last time Missouri passed a large bond proposal says lawmakers must focus on identifying needs and how they will be met, if they want to get one passed now. 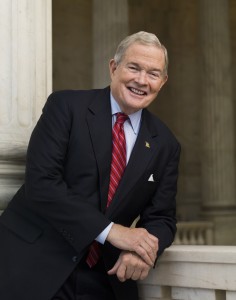 Kit Bond was the Governor when Missouri passed its last major bond proposal in 1982.

Kit Bond says when a bond package was passed under his administration, the state was in a tight fiscal situation.

“There was a deficit in the budget and the federal revenue sharing with the states had been cut off, and we badly needed upgrades to our prison system and to comply with the handicap accessibility, so the bond issue was the only way to get it.”

He notes he has advocated for passage of a transportation tax.

“The most direct would be gas tax increase … we’re one of the lowest around … or there are other taxes since there are some automobiles that don’t burn gas that are on the highway … or they have talked about some kind of sales tax, but if we don’t get some additional revenues in pretty soon, I-70’s not only going to be a parking lot it’s going to be a parking lot that looks like a gravel road.”

Bond says while there could be local projects that merit state money, particularly if they have a statewide impact, if the proposal becomes loaded down with local projects it could make it overly complicated for voters.

“I think you have to have it rather straightforward and you can’t put a whole bunch of individual projects or put out a laundry list because if voters don’t understand it they’re not going to be willing to support it. You have to have not only the consent of the voters but the understanding of the voters when you ask them to vote for it.”

Governor Jay Nixon has yet to take a position on a bonding proposal. Bond’s advice to him?

The effort to create a bonding proposal in the House is afoot. 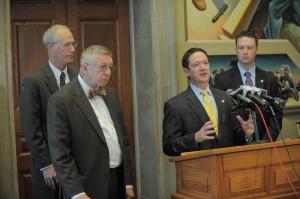 A bipartisan effort has been announced to create what proponents bill as potentially the biggest jobs package in state history. House Speaker Tim Jones (R-Eureka) says what it would support and other details must be worked out by a committee he has created.

“The bonds, if they’re approved, would of course have to be submitted to the voters for final approval but our suggestion would be at the outset we would look at financing construction at college campuses, repairs at state mental health institutions and office buildings and as I mentioned, perhaps even this could be one of the components for our transportation needs.”

Jones says a bonding proposal would be a jobs package.

“We can actually put people to work almost immediately because, as I mentioned, these projects are on the books. All the institutions I mentioned simply revamp their project wish list every year and they’re ready to go as soon as the General Assembly puts something on the ballot which would hopefully be supported by a majority of Missourians.

78 representatives have signed on as co-sponsors of the proposal with both Republicans and Democrats among that number.

At the top of the co-sponsor list is Representative Chris Kelly (D-Columbia) who Jones appointed to head the committee that will hammer out the House’s proposal.

Kelly says it will begin with the same 950 million dollar plan that has been filed in the Senate.

“Where it goes is going to be an organic process that our committee, the budget committee and ultimately the floor will work on. The Speaker has instructed us to find a way to deal with the transportation issues … we don’t have all the answers for him yet but working with the committee members, we’re going to try to find the answers and try to fit these two things together appropriately.”

The Fulton state hospital is likely to be a target for part of the proceeds. Representative Jeanie Riddle (R-Mokane) says rather than try to update what’s there, a new facility is needed.

“Building a new hospital will change the dynamics of what it’s costing the state right now in utility costs because it’s a very old building, in staffing costs because we have the long hallways and the dynamics of the building would be vastly different now with today’s policies, and with workmen’s injuries … the employees and the injuries that they are incurring there.”

The cost of a new, modern mental health facility to replace the Fulton hospital is estimated at $211 million.

Jones says he doesn’t want to rush the process, adding he hopes to see a compromise reached with the Senate by the end of the 2014 session.