You are here: Home / Archives for boat racing 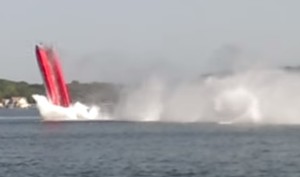 Forty-four-year-old Michael Fiori died Tuesday evening at University Hospital in Columbia.  Fiori was the throttleman of the 46-foot SC Outerlimits boat that flipped as high as 50 feet in the air before landing on his side of the canopy before coming to rest right side up.  The boat was running more than 150 mph this past Saturday at the Lake of the Ozarks Shootout.

Frank Sciacca, general counsel for Fiore’s company, Outerlimits Offshore Powerboats, said in a statement that Fiori died from complications from surgery after the accident.  Sciacca says Fiori was married with three young children.

National and World Champion as well as World Record Holder Dave Scott, an offshore racing legend, will be the honorary chairperson. This will be a world-class race event that will attract race teams, support operations, and thousands of spectators from the Lake area and the surrounding communities.

The OSS race committee is currently working with officials from Ameren Missouri, the Missouri Department of Transportation, and the city of Lake Ozark on a plan to allow spectators onto the dam in order to view the race.