You are here: Home / Archives for Blind Medical Subsidy Fund

Whether eligibility restrictions will be added to the blind medical subsidy fund will next be considered by House and Senate conferees. 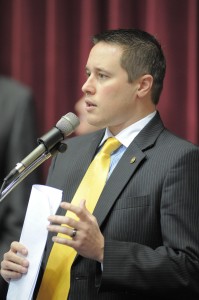 The legislature’s budget proposal added such restrictions to that fund in the budget, which some lawmakers and the Governor say is meaningless without accompanying language in statute.

“We had taken in (the budget) the requirements of the SCHIP program and applied them to the blind healthcare program. Again, House Bill 2011 got signatures of every member of the conference committee, republican, democrat, House and Senate, and we passed the bill out of both chambers.”

The Senate refused to accept the House’s version of the bill and sent it back. The House has requested a conference to settle the chambers’ differences.

See our earlier stories on the blind pension fund in the state budget. 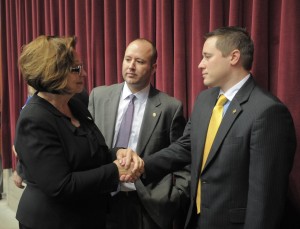 The compromise was to include over $24 million dollars for the fund and to add language to the budget that restricts eligibility for it based on income levels, then provide over $3 million additional dollars through premiums and copays resulting from the eligibility guidelines.

Governor Jay Nixon’s office has released a statement saying adding those restrictions “through the budget process does not change existing law – and is invalid.”

House Minority Floor Leader Mike Talboy (D-Kansas City) agrees. “As early as 2010, and a myriad of cases beforehand, state … language in the budget that attempts to legislate is invalid.”

The ranking Democrat on the House Budget Committee, Sara Lampe (D-Springfield), says Governor Nixon should know what he’s talking about. “The Governor clearly comes out of the Attorney General’s office and he probably knows more about that than I do, but we clearly have to look at that.”

Lampe says if the legislature’s proposal doesn’t stand, she doesn’t know where else the $3 million-plus dollars would come from except education.

House Budget Committee Chairman Ryan Silvey (R-Kansas City) says putting directive language in a budget is not a new practice. “The appropriations bills are also laws, and to say that we don’t put direction on how to spend an appropriation in the budget is to have not read the budget. I mean, we do it all over the budget.”

In fact, Silvey says, the language the Committee used is based on that for the State Children’s Health Insurance (SCHIP) program, and was found in that section of the budget.

See the eligibility  language for the SCHIP program (Section 11.555) and the Blind Pension (Section 11.128)

House Democrats say the Republican majority might amend the eligibility language from the blind pension section of the budget to another bill and pass it before the end of the session, on Friday.

A conference committee of the House and Senate could begin meeting as early as today to hash out the two chambers’ differences in the budget. The Chairman of the House Budget Committee says the Senate’s budget proposal is not balanced. 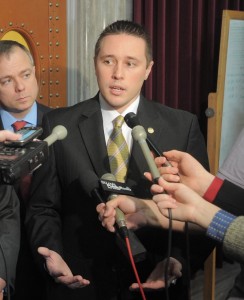 Ryan Silvey says an amendment offered by Senator Jim Lembke (R-St. Louis) threw the Senate’s proposal off kilter. “Senator Lembke was very clear … there was only $3 million left in the bank and he was very upset there was only $3 million left on the bottom line, and then by the time he got to House Bill 2011, he offered a $10 million dollar amendment. It’s not rocket science to figure out that three minus ten is negative-seven, so they put it out of balance singlehandedly.”

Silvey says what puts the Senate proposal out of balance is the restoration of a $28 million dollar blind medical subsidy fund, which the House proposed cutting. “It’s been our argument all along that it’s not sustainable, so it’s ironic that issue, which has become such a focal point, is what put the budget out of balance.”

Silvey says the two chambers do agree on at least one point. “Clearly the House made higher education a priority. We’re glad that the Senate concurred with that. The Governor’s $106 million cut to higher education is no longer on the table and won’t be discussed in conference.”

The state Constitution requires the budget be balanced and delivered to the Governor by the end of next week. Silvey is confident that will happen. “We’re going to figure out how to clean up the mess and what we can get in conference, but I’m confident that we’ll have conference committee reports on time by the constitutional deadline and that the Governor will get a balanced budget from the general assembly.”

Silvey will be one of the budget conferees for the House. Speaker Steven Tilley (R-Perryville) says he has a good idea who the others will be. “The vice chair of budget, Rick Stream (R-Kirkwood), then you’re going to see the third person from the Republican side be either Lincoln Hough (R-Springfield) from southwest Missouri or Tom Flanigan (R-Carthage) from southwest Missouri as well. On the Democratic side it will almost always be Chris Kelly (D-Columbia) and Sara Lampe (D-Springfield).”

The House is anticipated to vote today to send the Senate a $24 billion spending plan that does not include funding for the Blind Medical Subsidy Fund. 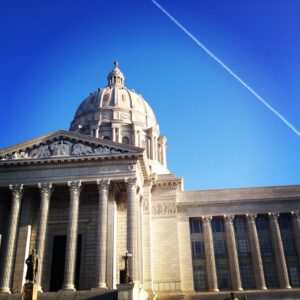 The $28 million fund was eliminated and the money used to help restore the $106 million dollar cut to higher education in the Governor’s budget proposal. Three Democrats had amendments drafted to take money from elsewhere in the budget to replace some or all of the Blind fund, but only one was offered during floor debate and that was defeated.

Representative Sara Lampe (D-Springfield) proposed using nearly $2 million that goes to drug testing Temporary Assistance for Needy Families recipients and to printing photos on food stamp cards. She said, “Both of those provisions are really focused on low-income individuals, and they’re punitive actions because of the worry that people have of misuse … our needs are greater, clearly, in the area of those who are blind than it is in punitive action.” Lampe’s idea was voted down. Budget Committee Chairman Ryan Silvey said the TANF testing proposal was a priority last session that passed with an overwhelming majority in the House, and should be allowed to stand.

Representative Chris Kelly (D-Columbia) had a couple of amendments, but opted not to offer them. One set would have taken money for the blind pension out of increases for education and higher education, something Kelly says he was willing to take responsibility for.

Kelly says the Budget Committee went too far and acted too soon in cutting the Blind fund. “We don’t know the consequence. I think (Health, Mental Health and Social Services Appropriations) Chairman (Tom) Flanigan did some important thinking on this issue, and we should be looking at programs like this, but we didn’t have good evaluation of what the effect is and we may be able to do some of this but I don’t think we took a good look at the effect on all these people.”

Kelly and Representative Jeanne Kirkton (D-Webster Groves) both had an amendment to take $5 million from the information technology budget in the Office of Administration, but neither lawmaker offered them. Kirkton says, “After speaking with the department, it would have caused major havoc with them and (I) decided not to pursue that route.”

House Budget Committee Chairman Ryan Silvey (R-Kansas City) says that those amendments were not offered is “a little bit baffling.”

Senate Budget Committee Chairman Kurt Schaefer says he doesn’t have a plan for how to address the Blind fund, assuming the situation doesn’t change before the House finally passes its budget. “Everything is on the table,” he said.