You are here: Home / Archives for birth control

The House has passed its version of legislation to redefine what medical workers can choose not to do based on conscience. 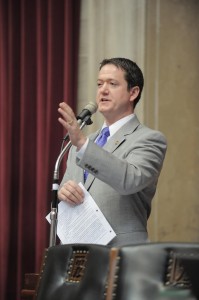 The House version of conscience rights for medical workers legislation is sponsored by House Speaker Tim Jones (R-Eureka). He says the bill strengthens the definitions of the medical procedures it allows workers to opt out of.

“Abortion, abortion-inducing drugs, contraception, sterilization which is not medically necessary, assisted reproduction, human cloning, embryonic stem cell research, human somatic cell nuclear transfer, fetal tissue research and nontheraputic fetal experimentation. That’s it. If it’s not in the bill, it’s not included and you can’t use it as the basis for your objection to that medical procedure.”

Jones says the bill could not be used to deny a woman access to emergency contraception in cases of rape. He says he has been assured, that is in keeping with Catholic doctrine.

“If it’s a rape then the idea is, under the doctrinal theory, that a pregnancy has not yet occurred so the drugs can be administered so the act of the pregnancy cannot occur with that short of a period of time, if you’re talking about the rape situation … I was told that directly from the Catholic authority. They showed me the directive.”

Several House Democrats speaking against the bill maintained it would deny emergency contraception.

Representative Stacey Newman (D-St. Louis) has opposed versions of this legislation in the past, and says this version causes her even greater concern.

“Remember the original bill was a conscience bill … that would allow any medical professional, any medical entity to refuse treatment for religious reasons. Because it had trouble in committee, this bill was narrowed to just deal with reproductive health … just deal with women.”

Jones tells the House his bill also specifically defines when a medical worker can and can not claim a conscience protection right.

The proposal goes to the Senate on a 116-41 vote, a great enough margin to overturn a Governor’s veto if no legislators change their votes.  11 Democrats voted for the bill.

A hearing in the House Committee on Children, Families and Persons with Disabilities on a proposal to extend so-called “benevolent” tax credits turned into a discussion about abortion and birth control on Tuesday. 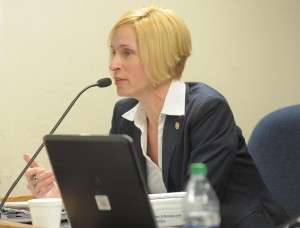 The hearing was on a bill that would extend tax credits for donations to charitable causes, such as centers that help children in crisis, food banks and more. The debate regarded credits for pregnancy resource centers.

“We know that what happens with some of these facilities is that you don’t get the proper information early on, there are delays and sometimes these delays will put people beyond the point at which they can legally get an abortion or put them in a position where the procedure will be more risky to them,” she says.

Sumners discussed some of the findings of that study.

“Sixty-nine percent of these facilities said that there was a link between abortion and hormonal birth control increasing infertility,” she says. “Ninety-two percent wouldn’t tell a woman where she could obtain birth control. Fifty-four percent stated or implied that condoms are less effective in preventing sexually transmitted diseases than they are. Twenty-eight percent told women in their written materials that there is a link between abortion and breast cancer.”

Sumners told lawmakers she wanted them to have the facts before they extended the credit benefitting those centers.

Rep. Genise Montecillo (D-St. Louis) indicated she will offer an amendment to the bill to require that medical information provided by clinics be accurate.

Rep. Eric Burlison (R-Springfield) says the hearing on his bill about charitable tax credits was hijacked.

“That’s unfortunate because we’re trying to just accomplish something that is very good,” Burlison says. “There’s a lot of good that’s happened in all these benevolent tax credits.”

Barbara Brown-Johnson, president of the Missouri Network of Child Advocacy Centers, testified to urge lawmakers to extend the “children in crisis” credit. She says at her center in Springfield, it yielded $534,000 in four years and over $240,000 in July and August, 2012 alone.

She says one thing it supports is forensic interviewers who interview children going through stressful situations.

“This little boy asked a different kind of question that we’d never been asked before,” Brown-Johnson says. “He looked at the interviewer and he said … he was eight … he said … ‘Yeah, I have a question.’ He said, ‘Can you tell me why people keep hurting me?’ That’s a question no child in Missouri or any state should ever have to ask.”

The legislation will come to a vote in the committee next week.

A House-Senate Committee could be next to consider a package containing a number of measures related to religious objections to abortions and birth control. 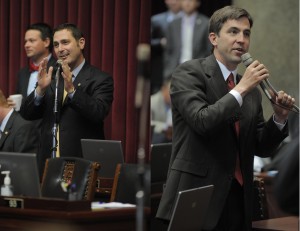 The measure contains several proposals that have been heard earlier in the session. One would prevent employers or employees from being forced to provide or obtain insurance coverage for abortion, sterilization or birth control and would bar discrimination or penalty against those employers or employees. It also includes language to let health care workers and institutions opt out of procedures they have moral, ethical or religious objections to.

Majority Floor Leader Tim Jones (R-Eureka) says the package is in response to the Affordable Care Act, “To protect us from something that this nation has been struggling with for over two years and that’s the onerous mandates contained in the federal healthcare takeover. The bill that is currently under consideration in the Supreme Court.”

Several St. Louis Democrats spoke against the package. Representative Susan Carlson (D-St. Louis) says it accomplishes nothing. “This is a waste of our time, it’s a waste of this body’s energy and intelligence and the taxpayers money of this state. This is going to get resolved. It’s in court already. This is just a way for people to get more attention drawn to this issue.”

Representative Stacey Newman (D-St. Louis) calls the bill part of a “war on women.” She also says it could have a lot of unintended consequences. “It also will deny insurance coverage based on any procedures for sterilization … any kind of medical treatment leading to sterility could be denied under this. Medical professionals could even refuse to process bills, they can refuse to handle medical records, even set up an exam room if they have a medical objection to the procedure that a physician has required of me.”

An amendment added to the bill would let employees decline to pay into group insurance plans that offer coverage for elective abortions.

Representative Jay Barnes (R-Jefferson City) sponsored the language. “My amendment says very simply that those people who find it morally, ethically, religiously appalling that they might have to pay for an abortion don’t have to pay for them.” He asked House democrats opposing the bill, “Your side says constantly we shouldn’t be imposing religious beliefs or such on others. Why should people who want abortions have to force people who are pro-life to pay for them?”

Representative Mike Colona (D-St. Louis) said the proposals will drive up insurance costs. “What we’re going to be doing, simply put, is pricing that coverage above what your average, ordinary, every day person can afford. I’d rather somebody look at me straight in the face and say we’re going to deny that to you because we think you’re wrong and we know better because we’re men than do it through the back door and jack up the price of coverage.”

The House and Senate have rejected one another’s versions of the legislation and could go to conference to try to hammer out differences. A committee would have to act quickly with the end of the legislative session coming tomorrow evening.